Nigerian Embassy In Canada Reopens After One Month - NaijaCover.Com
Skip to content 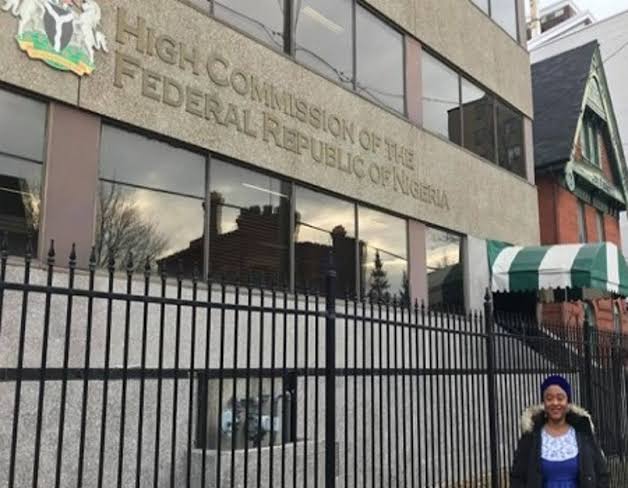 The Nigerian high commission in Canada has announced it will resume operations on Thursday.

The high commission suspended its activities indefinitely in August amid the COVID-19 pandemic and overwhelming passport renewal requests from Nigerians in the country.

The embassy claimed the decision was reached “because people show up at the chancery uninvited.” It also accused some citizens of assaulting one of the embassy’s staff a few days before the closure.

This newspaper learnt that many Nigerians residing in different parts of Canada had applied for the renewal of their passports for the purpose of extending their work permits, study visas or seeking medical care abroad.

These people, after paying for the new passports, met a gridlock at the embassy’s only office in Canada located in Ottawa.

The commission had also been accused of poor communication and bad service delivery.

Meanwhile, in a statement issued on its website on Wednesday, the mission said it would resume immigration and consular services on September 24.

According to the release, the passport renewal arrangement would now be treated after applicants had filled out the forms and met the online requirements for the passport process.

They were instructed to send an email to passportscheduling@nigeriahcottawa.ca to be given an interview date.

“Please do not send more than one email to request for an appointment,” it cautioned.

“Also, each request sent in for an appointment must state the full name of the passport applicant as it appears on the Nigerian passport,” the commission advised.

CHECK IT OUT:  Storekeeper Lands In Jail For Allegedly Stealing Beverages Worth N1.5M

“In a situation where you are requesting for an interview date on behalf of an applicant, kindly state the full name of the applicant. For family scheduling please indicate all family members that require renewal as you will not be recognised as one unit. Each member of the family will need to be given an appointment.

“Upon arrival, all applicants must come with printed copies of their passport interview invitations, these must be presented to the security officials before entry into the chancery.”

It said hours for passport renewals are 9:30 a.m. – 12:30 p.m., warning that anyone who shows up at a later time would not be allowed into the chancery, “even if such a person has an appointment.”

The commission noted that anyone coming into the chancery must wear their face masks, sanitise their hands and practice social distancing as public health measures put in place to limit the spread of coronavirus.

“Please note that anyone who shows up at the chancery without a printed invitation for an interview would not be attended to,” it warned.

The post Nigerian Embassy In Canada Reopens After One Month appeared first on .