“He Has Everything To Be Number 1” – Super Eagles Invitee Tipped To Be Nigeria’s Next Great Goalkeeper - NaijaCover.Com
Skip to content 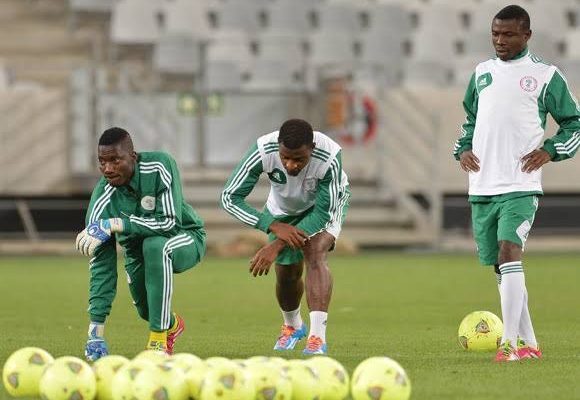 Following the footsteps of the excellent Vincent Enyeama and Carl Ikeme has proven too difficult for the likes of Daniel Akpeyi, Francis Uzoho, and Ikechukwu Ezenwa, but it just could be the time for another to stake his claim

Alampasu rose to prominence after winning the Golden Gloves as the tournament’s best when the Golden Eaglets lifted the U-17 World Cup in the UAE in 2013.

The youngster then made his senior debut for Nigeria in June 2017, introduced as a 70th-minute substitute for Ikechukwu Ezenwa as the Super Eagles thrashed Togo 3–0 in an international friendly match.

But struggles at club level in Portugal means Alampasu was frequently overlooked as coach Gernot Rohr searched for solutions to the national team’s goalkeeping problems.

The Franco-German tactician backed Uzoho at the 2018 World Cup in Russia, then opted for Akpeyi at the 2019 African Cup of Nations in Egypt, with mixed results.

Ahead of the 2021 Afcon and 2022 World Cup, Rohr has recalled Alampasu – who is enjoying a new lease of life in the Latvian top division – as the former Gabon coach looks to provide stiff competitions for his regular shot-stoppers.

Shorunmu, who once worked with Alampasu, expects the 23-year-old to show he can be more than just a backup to Akpeyi and Uzoho.

“I think Dele has everything to be Eagles No.1,” Shorunmu told The PUNCH.

CHECK IT OUT:  ‘Anytime You Have Sex With A Person You Bond With Them’ – Tonto Dikeh Reveals

“I have watched him. He has shown great maturity and form, but he has to prove he deserves to be the starter during the training sessions. That’s how it should be. Then the coach will decide who will be the starter.

“I believe he will offer a good competition for Uzoho and Akpeyi if he excels when he gets his chance.”

Alampasu, who joined Ventspils in February, has kept three clean sheets and conceded nine goals in 11 games for Ventspils.