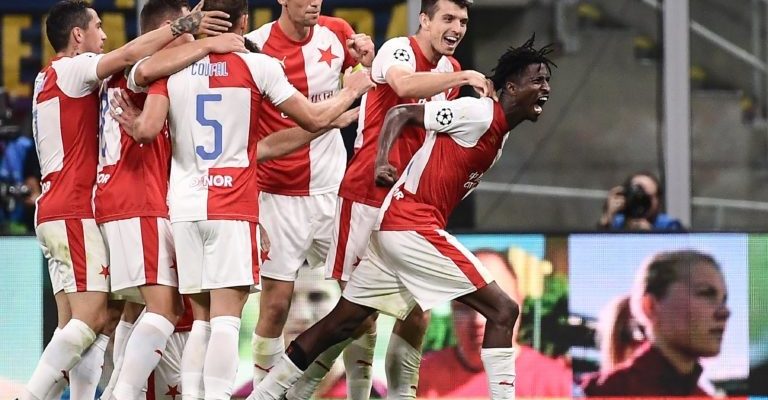 Super Eagles stars Peter Olayinka and Frank Onyeka both scored, still it was a disappointing night for the former as Midtjylland thrashed Slavia Praha to book their place in this season’s Champions League group stages.

Both sides had played out a goalless draw in Prague last week, which left the tie delicately poised on Wednesday night.

Midtjylland started the game as slight favourites as they are the home team, but it was Slavia Praha that drew the first blood.

The Red and Whites took the lead as early as the third minute through Nigerian striker Peter Olayinka. It was Olayinka’s second goal in the competition having scored one last season.

His goal ensured Slavia went into the break with the lead. The second half kicked off with the home side trying to find a way back into the game.

But they had to wait till the 65th minute before getting the equaliser, which came courtesy of a Sory Kaba strike.

Knowing they need another goal to avoid going out on away goals rule, Midtjylland poured out in numbers for the winner.

And nine minutes from time, Kaba gave his side the lead from a penalty rebound after his spot-kick had been saved.

New Super Eagles invitee, Frank Onyeka then made it three in the 88th minute before Andres Dreyer added a fourth in stoppage time.

CHECK IT OUT:  Kogi State Government Blames Infiltrators For Rising Crime Wave In The State