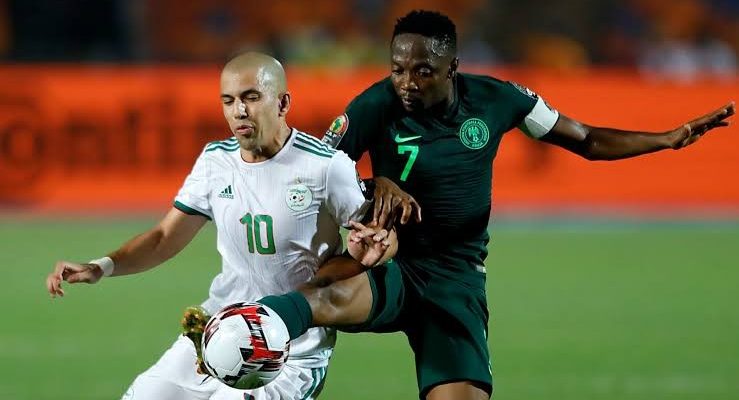 Nigeria will trade tackles with Algeria in what will be the 21st meeting between the two nations on October 9 in Austria.

The Super Eagles and the Dessert Foxes have clashed in three different competitions – the All African Games, the African Cup of Nations, and the World Cup qualifiers.

Friday night’s face-off is the first time the two continental giants will meet in a FIFA-rated friendly match.

Nigeria’s record against the Afcon kings has been impressive with nine wins, and three draws from the previous 20 matches.

The first-ever match between Nigeria and Algeria was played at the 2nd All-Africa Games (Lagos 1973), ending in a 2-2 draw. But the West Africans defeated all other comers, including Guinea in the final, to win the football gold medal on home soil.

Algeria hosted the next edition five years later and claimed the first win between the two nations, beating Nigeria 1-0 in the final to claim the football gold in Algiers.

But Nigeria will get sweet revenge at the final of the 1980 African Cup of Nations when Segun Odegbami’s first-half brace and Muda Lawal’s second-half strike powered the Green Eagles to a 3-0 win and their first Afcon glory.

A period of Algerian dominance followed, though, with the north Africans winning the next three matches between the two countries.

After managing a stalemate at the 1984 Afcon, Nigeria edged Algeria on penalties (9-8) at the semifinals of the 1988 Afcon after full-time scores stood at 1-1. Cameroon beat Nigeria in the subsequent final match.

A 5-1 opening day thrashing at Algiers ’90 remains the Eagles’ heaviest defeat in the hands of the Foxes, but Nigeria rallied to make it to the final of the tournament where the hosts awaited yet again.

One goal separated the old foes on the day, as the Algerians became African champions for the first time in history.

But it was Nigeria’s turn to stop the Foxes from reaching the 1994 FIFA World Cup in the United States, crushing the Algerians resistance in Lagos (4-1) before pulling off a 1-1 draw away from home.

Nigeria then held the bragging rights between 1995 and 2016, winning six consecutive matches, including an emphatic 5-2 win in a World Cup qualifying game in 2005.

Gernot Rohr then guided the Super Eagles to Russia 2018 after navigating past the Algerians in a ‘Group of Death’ that also had former champions Cameroon and Zambia.

Nigeria beat Algeria 3-1 on home soil before forcing the Foxes to a 1-1 draw in Algiers.

The Algiers result was later changed to a 3-0 defeat for the West Africans after discovering that they fielded an ineligible player for the encounter. Thankfully, the Eagles had secured enough points to guarantee their spot in Russia.

The most recent face-off between the two nations was at last year’s Afcon in Egypt, where a late Riyad Mahrez freekick helped Algeria secure a 2-1 victory in the semifinals.

CHECK IT OUT:  Barcelona President Reveals How Many More Years Messi Will Spend At The Club

Algeria then defeated Senegal 1-0 in Cairo to lift their second continental crown.

The rivalry between the two traditional football nations will resume on Friday in Austria when Nigeria will look to exact some pound of flesh on the Foxes for that latest defeat.