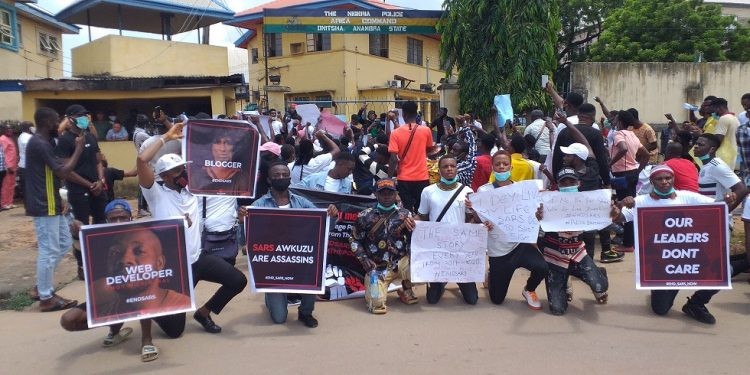 Defiant youths numbering over 300 on Monday blocked the entrance gate of the Onitsha Area Command of the Nigerian Police Force in continuation of their protest for the disbanding of the federal Special Anti-Robbery Squad (SARS) and for police reforms in Nigeria.

Under the aegis of National Youth Council of Nigeria, Ohanaeze Ndigbo Youth Wing, and some young lawyers, the youths, after holding rally at the popular DMGS Roundabout, stormed the Governor’s Lodge, chanting protest songs .

They carried placards with different inscriptions, reading: “Wrong is Wrong, No Matter who does it”, “We need Transparency and Accountability”, Using iPhone doesn’t make me a yahoo”, among others.

Speaking on behalf of the protesters, Anambra State Chairman, National Youth Council of Nigeria, Samuel Egwuatu, who recounted abuse by SARS operatives, called on State Governor Willie Obiano and the police authorities to use their positions to follow up on the demands of Nigerian youths.

Another protester, Ebelechukwu Ngini, said beyond the pronouncement for disbandment of SARS by the Inspector-General of Police, there is an urgent need for total reform of the police system in Nigeria.

He called for the removal of all police checkpoints in Anambra State, saying motorists and innocent citizens are being extorted and dehumanised at the check points.

The protesters described Awkuzu SARS as the deadliest in the country, calling for probe of all their activities and urged the Government to also look into the activities of Anti-Cult Special Squad, Enugwu Ukwu, lamenting how students are being intimidated and denied access to lawyers, saying that some have spent years in detention without their cases being tried in court.

CHECK IT OUT:  120 Cultists Denounce Membership In Ebonyi, Get Baptized (Photos)

He said the police is very much open to reforms and would help in making Nigeria a better and safer country.

The Transition Committee Chairman for Onitsha North, Hon Patrick Aghamba, who spoke on behalf of Governor Obiano, commended the students for their comportment and maturity displayed during the protest, and assured them that the Governor will address all their grievances.