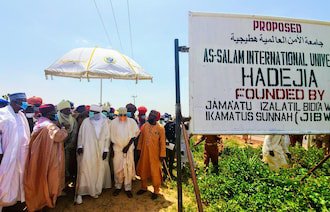 Nigeria’s political stakeholders have donated about N1 billion for the construction of the facilities of a proposed Islamic university, Assalam Global University, in Hadejia city, Jigawa state.

Daily Trust reported that governors, lawmakers and others announced their donation on Sunday, October 11, during the institution’s foundation-laying ceremony.

Another person who asked not to be identified reportedly donated N500m while the national leader of the All Progressives Congress (APC), Bola Tinubu, donated N10m.

The proposed university is a brainchild of the Jama’atul Izalatul Bida’a Waikamatul Sunnah (JIBWIS) popularly referred to as Izala Movement in Nigeria.

In his address at the occasion, the national chairman of JIBWIS, Sheikh Abdullahi Bala Lau, said the plan is to allow the youth to gain access to western and Islamic knowledge.

He, however, noted that the university was not peculiar to Muslim ummah alone but to all and sundry, provided one’s qualification meets the standard of the varsity.

The Sultan of Sokoto, Sa’ad Abubakar, performed the foundation-laying ceremony, while President Muhammadu Buhari was represented at the occasion by the minister of communication and digital economy, Dr Ibrahim Ali Pantami.

The post Governors, lawmakers, Tinubu, others donate N1bn for construction of Islamic university appeared first on .