Betting Tips: Weekend Games That Could Double Your Money - NaijaCover.Com
Skip to content 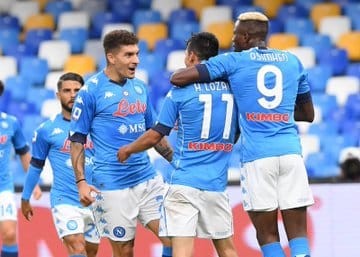 Club football returns across Europe’s major leagues following two weeks of international break which no one asked for.

There are some mouth-watering clashes in some of these leagues ahead of the return of Champions League football which starts next week.

With a lot of games taking place this weekend, it gives fans to bet on their favourite teams. Soccernet in its usual tradition is giving out betting tips for the week. Here are the betting picks for this weekend.

Napoli vs Atalanta (Serie A): Napoli return to Serie A action after their clash against Juventus could not hold due to Covid-19.

The Blues failed to turn up for the clash against the champions after two of their players tested positive to the coronavirus.

As a result of Napoli’s refusal to travel to Turin, they were given a one-point deduction while Juventus were awarded a 3-0 win.

Nonetheless, Gennaro Gattuso’s men will hope to put that behind them when they welcome Atalanta to the Stadio San Paolo.

Atalanta are the early pace setters with maximum points from three games.  La Dea have continued from where they left off last season.

Atalanta have scored at least four goals in their last three matches (Serie A).

Napoli have scored at least two goals in their last ten home matches (Serie A).

There have been over 2.5 goals scored in nine of Napoli’s last ten home games (Serie A).

CHECK IT OUT:  WHAT SHOULD I DO? She Keeps Insisting On Having S3x Without Protection

Napoli have won seven of their last eight home matches (Serie A).

Atalanta have scored at least two goals in their last three matches against Napoli in all competitions.

Betting Tips: Everything points to a goal-fest in this clash. Napoli scored six against Genoa last time out, while Atalanta have scored 13 goals this season. (Over 2.5)

Manchester City vs Arsenal (Premier League): It has been a stuttering start to the campaign for Manchester City. Pep’s side sit in the bottom half of the table with just four points from three games, although they have a game in hand.

In contrast, Arsenal have started fast out of the blocks, winning three of their four league games so far. However, their only loss came against Liverpool, which was their first real challenge.

But the clash against City presents Arteta’s men with another chance to lay down a marker this season.

There have been over 2.5 goals scored in Man City’s last seven home games (Premier League).

Man City have seen over 2.5 goals in their last five home matches against Arsenal in all competitions.

Man City have won their last four home matches against Arsenal in all competitions.

Betting Tips: City will miss the services of Kevin De Bruyne, but Sergio Aguero could make a return. City go into the clash as slight favourites, but Arsenal will feel confident of causing a surprise. (City win or Over 2.5)

Real Madrid vs Cadiz (La Liga): Real Madrid will aim to consolidate their lead at the top when they welcome newly-promoted side, Cadiz.

Los Blancos sit top with ten points from four games, just one point ahead of Real Betis and three points clear of Barcelona- although the Catalan giants have a game in hand.

CHECK IT OUT:  BBNaija: I Trust My Husband Around Other Women But Can’t Share Him – Mike’s Wife, Perri

Cadiz, meanwhile, have impressed on their return to the Spanish top-flight, picking up seven points from a possible 12.

Real Madrid have won 13 of their last 15 matches (LaLiga).

Real Madrid have kept a clean sheet in five of their last six home matches (LaLiga).

Real Madrid have won their last three matches against Cadiz in all competitions.

Real Madrid have seen over 2.5 goals in their last three matches against Cadiz in all competitions.

Betting Tips: Cadiz have been impressive in the games they have played so far, but it will be a surprise if they take anything away from this game. (Real Madrid win)

Getafe vs Barcelona(La Liga): Barcelona dropped points at home to Sevilla last time out, but they will hope to get back on track when they travel to Getafe.

The Blaugrana’s have seven points from three games but have a game in hand. However, failure to win at the Estadio Coliseum Alfonso Pérez could see them chasing rivals Real Madrid at the early stage of this season.

Getafe will be a tough nut to crack, though, as the Azulones have only lost just once this campaign.

Barcelona are undefeated in their last 17 matches against Getafe in all competitions.

Barcelona have been winning at both half time and full time in seven of their last nine matches against Getafe in all competitions.

Barcelona have won their last 4 away matches (LaLiga).

Betting Tips: Getafe will be a tough challenge, but Barcelona can’t afford to drop points even at this early stage of the season. (Barcelona win)

CHECK IT OUT:  See What Adekunle Gold Said When A Follower Asked Him To Do Giveaway

Hoffenheim vs Borussia Dortmund(Bundesliga): Both teams are level on points with two wins from three matches. However, Hoffenheim will be confident of a victory having stunned champions Bayern Munich already.

Borussia Dortmund bounced back from their shocking 2-0 loss with a 4-0 victory over Freiburg last time out. But Hoffenheim will be a difficult challenge for them.

There have been over 2.5 goals scored in ten of Hoffenheim’s last 11 home games (Bundesliga).

Hoffenheim have seen over 2.5 goals in eight of their last nine matches against Borussia Dortmund in all competitions.

There have been under 2.5 goals scored in Borussia Dortmund’s last three away games (Bundesliga).

Betting Tips: This is hard to call, but there should be goals (Over 2.5)