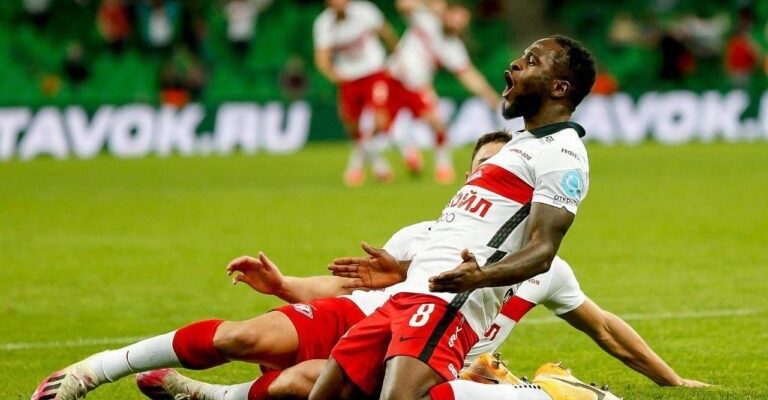 The Nigerian winger scored his first league goal for Spartak Moscow on his full debut on Saturday, but a former Russian star has cautioned him to be prepared for an unpredictable year ahead

On-loan Chelsea winger Victor Moses has expressed his delight at finding the back of the net in Spartak Moscow’s 3-1 win at Krasnodar.

Moses scored just past the half-hour mark to double Spartak Moscow’s lead after teammate Ezequiel Ponce had given the visitors a 13th-minute lead.

A late strike from forward Jordan Larsson sealed the win for the Muscovites after Leon Sabua’s close-range effort had reduced the deficit for the home side.

The win at Krasnodar sent Spartak Moscow to the top of the Russian Premier League table with 27 points from 12 games.

Moses took to his Facebook account to revel over a fine win and dedicate his goal to Nigerians who are going through a challenging period following the escalation of #EndSARS protests into widespread violence.

“Brilliant win today and delighted to get my first goal for the club. I dedicate my goal today to the people of Nigeria. Enough is enough. Nigerians have the right to protest and not be killed for it. #PrayForNigeria,” the Crystal Palace academy product wrote.

However, former Everton and Spartak Moscow midfielder Diniyar Bilyaletdinov has warned Victor Moses to be prepared for what he will face in the Russian Premier League.

Moses has had it plain-sailing so far in Russia since signing on loan from Chelsea a couple of weeks ago.

The former Super Eagles star’s introduction sparked an excellent comeback win at Khimki last weekend, only for him to score on his first start for Vladimir Ivic’s side.

CHECK IT OUT:  ‘I Am Not In Charge Of Transfers’- Tottenham Boss Pochettino

But Bilyaletdinov has warned Moses to keep up his level as the Russian top-flight is full of twists and turns.

“It’s good that he started quickly: the second game practically, to count how many minutes he spent on the field, scored, that’s good,” Bilyaletdinov told Sport Express.

“But we look further because our championship is unpredictable. What he will face next, he does not even know.

“Let’s see how he will manifest himself. And so, of course, congratulations on the first goal.”

Spartak Moscow last lifted the Russian Premier League title in 2017, and the club will hope Moses can help inspire another title triumph at the end of this season.