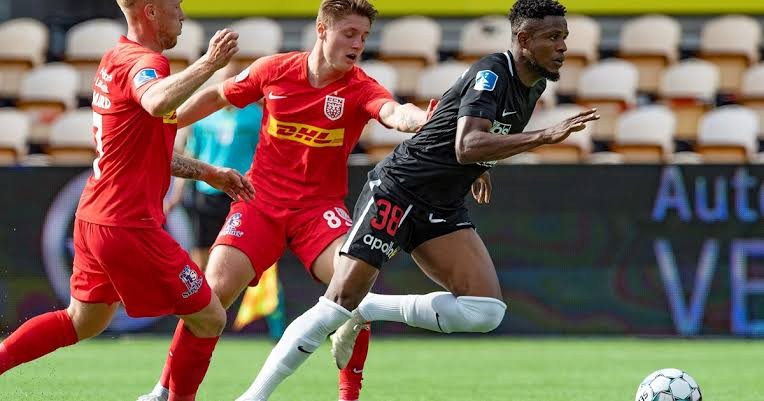 One cap Nigerian international Frank Onyeka was on the pitch for every single minute of action to help inspire Midtjylland to a come-from-behind 3-2 win at Brondby on Saturday.

In a Danish Superliga thriller served hot, the home side ran into a two-goal lead courtesy of Bruus’ 16th-minute effort and Lindstrom’s 51st-minute strike.

But Onyeka and mates began their fightback just past the hour mark when 22-year-old Danish midfielder Anders Dreyer halved the deficit.

The win sees Midtjylland overtake Brondby at the top of the elite division in Denmark.

In Portugal, new Super Eagle Zaidu Sanusi was sent-off in the second half, but Porto held on to beat Gil Vicente 1-0 at the Estádio Do Dragão.

Francisco Evanilson got the champions’ winning goal four minutes before the break.

Sanusi, 23, joined Porto from Santa Clara in late August and has featured four times in the Primeira Liga for the Portuguese giants.

In Spain’s Segunda Division, former Nigeria U-23 international Umar Sadiq delivered another good performance to help Almeria secure their first league win of the campaign with a 3-0 thrashing of Fuenlabrada.

Sadiq, who switched Serbia’s Partizan for Almeria a couple of weeks ago, bagged his first goal for the Spaniards in the 1-1 draw against Cartagena last weekend.

CHECK IT OUT:  American Rapper, Cardi B Is Considering Being A Nigerian Citizen (Photo)

Former Kortrijk star Moffi scored on his debut for Lorient last weekend in the 3-1 away win at Reims.