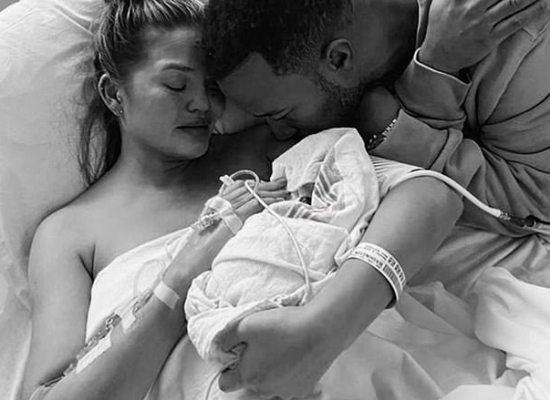 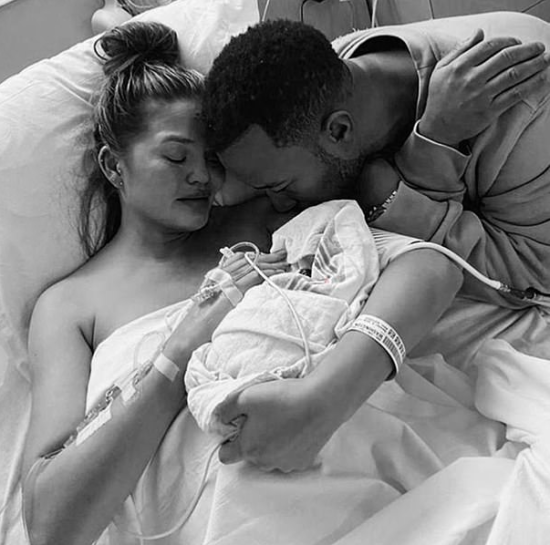 Chrissy Teigen, who lost her son Jack a few weeks ago, has penned a heartbreaking essay about her pain.

On Tuesday, October 27, the 34-year-old supermodel opened up about her heartbreaking ordeal in a brave essay posted to Medium.

She wrote: “I had no idea when I would be ready to write this. Part of me thought it would be early on, when I was still really feeling the pain of what happened.”

She added: “I thought I would sit in the corner of my bedroom with the lights dimmed, just rolling off my thoughts. I’d have a glass of red wine, cozy up with a blanket, and finally get the chance to address ‘what happened’.”

Revealing what actually happened, Chrissy said she gave birth to her third child, a son named Jack, stillborn after severe complications four months into the pregnancy.

She went on to thank fans for their messages of support.

She continued: “Instead, I’m writing from the downstairs couch, still cozied up in a blanket but buzzing from a morning of friends and fried chicken. I’m reading off countless notes from my phone — thoughts that have randomly popped up in the weeks since. I didn’t really know how I would start this, no matter the room or state I was in, but it feels right to begin with a thank you.

“For weeks, our floors have been covered in flowers of kindness. Notes have flooded in and have each been read with our own teary eyes. Social media messages from strangers have consumed my days, most starting with, ‘you probably won’t read this, but…’. I can assure you, I did.

“But I will tell you, some of the best letters started with, ‘You don’t have to respond to this, but…’. After we first lost Jack, I found myself incredibly worried that I wasn’t able to thank everyone for their extreme kindness. Many shared incredible personal experiences, some shared books and poems. I wanted to thank everyone, share our story with each individual person. But I knew I was in no state to. For me, the ‘no need to respond’ note was such a true relief. I thank you for each and every one of those.”

CHECK IT OUT:  Wale Turner – Abi (Prod. by Spellz)

Narrating what happened on the day she lost, her son, she wrote: “One of the standout moments from that morning (or evening? I have no idea) was me going through the halls of labor and delivery, and John saying ‘What, is there a fucking party going on here??’

“Here we were, just wheeled down to a new floor, me covered in a thin blanket to hide, knowing I was about to fully deliver what was supposed to be the 5th member of our beautiful family, a son, only to say goodbye moments later. People cheered and laughed right outside our door, understandably for a new life born and celebrated. You kind of wonder how anyone is thinking about anyone but you.

“At this point I had already come to terms with what would happen: I would have an epidural and be induced to deliver our 20 week old, a boy that would have never survived in my belly (please excuse these simple terms).

“I was previously on bedrest for over a month, just trying to get the little dude to 28 weeks, a ‘safer’ zone for the fetus.

“My doctors diagnosed me with partial placenta abruption. I had always had placenta problems. I had to deliver Miles a month early because his stomach wasn’t getting enough food from my placenta. But this was my first abruption.

“We monitored it very closely, hoping for things to heal and stop.

“In bed, I bled and bled, lightly but all day, changing my own diapers every couple of hours when the blood got uncomfortable to lay in. I actually became an adult diaper expert for my own personal entertainment, truly appreciating the brands that went out of their way to not make me feel like an actual shitting baby. Some were blush colored, with drawn delicate flowers. I got to the point where I was actually like, ‘hell yeah, throw me the pink ones!’ — something I never thought I’d be excited for. But there we were.”

She went further: “Finally, I had a pretty bad night in bed, after a not-so-great ultrasound, where I was bleeding a bit more than even my abnormal amount. My bleeding was getting heavier and heavier. The fluid around Jack had become very low — he was barely able to float around. At some points, I swore it was so low I could lay on my back and feel his arms and legs from outside my belly.

“After a couple nights at the hospital, my doctor told me exactly what I knew was coming — it was time to say goodbye. He just wouldn’t survive this, and if it went on any longer, I might not either. We had tried bags and bags of blood transfusions, every single one going right through me like we hadn’t done anything at all.

“Late one night, I was told it would be time to let go in the morning. I cried a little at first, then went into full blown convulsions of snot and tears, my breath not able to catch up with my own incredibly deep sadness. Even as I write this now, I can feel the pain all over again. Oxygen was placed over my nose and mouth, and that was the first picture you saw. Utter and complete sadness.”

At the time Chrissy shared photos shortly after the death of her son, some people called her out for taking pictures at such a moment.

Addressing it, she wrote: “I had asked my mom and John to take pictures, no matter how uncomfortable it was. I explained to a very hesitant John that I needed them, and that I did NOT want to have to ever ask. That he just had to do it. He hated it. I could tell. It didn’t make sense to him at the time. But I knew I needed to know of this moment forever, the same way I needed to remember us kissing at the end of the aisle, the same way I needed to remember our tears of joy after Luna and Miles. And I absolutely knew I needed to share this story.

“I cannot express how little I care that you hate the photos. How little I care that it’s something you wouldn’t have done. I lived it, I chose to do it, and more than anything, these photos aren’t for anyone but the people who have lived this or are curious enough to wonder what something like this is like. These photos are only for the people who need them. The thoughts of others do not matter to me.”

The post “I didn’t know how to come back to real life” – Chrissy Teigen opens up on her pains appeared first on .