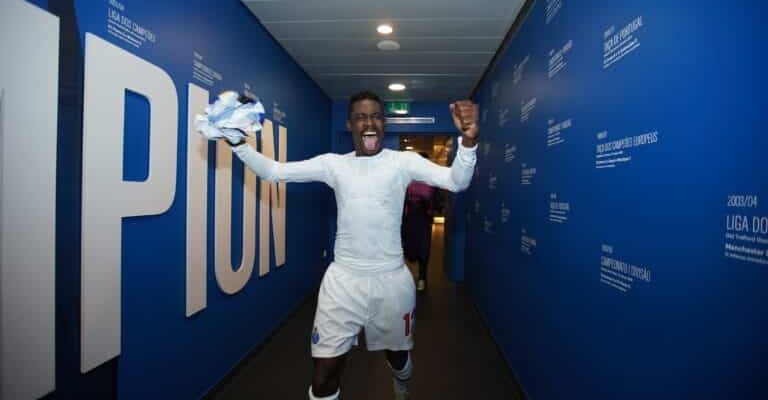 Nigerian internationals Frank Onyeka and Zaidu Sanusi were in action in the UEFA Champions League matchday two, but it was a contrasting night for both players.

Sanusi’s FC Porto bounced back from their opening day loss to Manchester City with a win over Greek side, Olympiacos.

The 23-year-old saw red in Porto’s league win over Gil Vicente last weekend, but he gave a superb performance on Tuesday night as the Dragons finally got going in this season’s Champions League.

Fabio Vieira put Porto ahead in the 11th minute after Olympiacos failed to play out from the back properly. It stayed like that until Sergio Oliveira’s strike in the 85th minute made the win comfortable for Sérgio Conceição’s side.

While it was a good day at the office for Sanusi, his compatriot, Frank Onyeka saw yellow as FC Midtjylland suffered a 2-0 defeat to Liverpool at Anfield.

The 22-year-old received a booking in the 25th minute following a challenge that stopped Liverpool’s counter-attack.

Diogo Jota put the Reds ahead ten minutes after the break before Mohamed Salah’s penalty in the 90th minute doubled the advantage.

Onyeka and Midtjylland now face an uphill task to qualify for the Round of 16 having lost their first game to Atalanta.

CHECK IT OUT:  Femi Adesina Reveals The Role Buhari Will Play In Who Emerges President In 2023