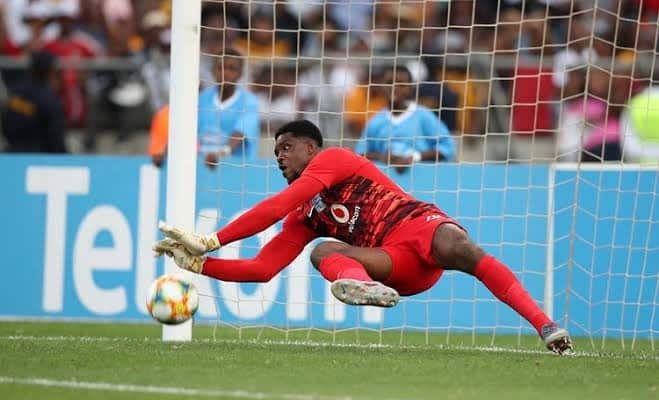 The Nigerian goalie missed the international friendly matches against Algeria and Tunisia in October, but he has confirmed his spot for the back-to-back qualifying games next month

Kaizer Chiefs have confirmed that goalkeeper Daniel Akpeyi will be part of the Super Eagles squad to face Sierra Leone on November 9 and again four days later in matchday three and four of the Africa Cup of Nations qualifying series.

Super Eagles head coach Gernot Rohr favoured the goalkeeping trio of Maduka Okoye, Dele Alampasu, and Matthew Yakubu during the recent clashes against Algeria and Tunisia, with Sparta Rotterdam’s Okoye manning the posts in both matches.

But Akpeyi, who made a decent return to the Kaizer Chiefs first eleven following his recovery from injury and resolving his work permit issues, could return as the Super Eagles number one.

The 34-year-old was Nigeria’s first choice at the 2019 AFCON in Egypt and was in goal as Rohr’s side claimed victories in their two opening qualifying games.

Confirming Akpeyi’s invitation on their website, the Amakhosi wrote: “Chiefs will be well represented on the international front next month during the international week as six Amakhosi players have received call ups to join up with their national team for 2022 AFCON games in the first week of November.

Rohr is yet to release the official list of invited players for the Sierra Leone games, but regulars such as Premier League duo trio of Alex Iwobi, Semi Ajayi, and Ola Aina should top a 25-man list.

CHECK IT OUT:  Oluwo Of Iwo Vows To Join President Buhari’s Critics

Victory in both games against the tiny West African nation will see Nigeria book their spot in Cameroon 2022.