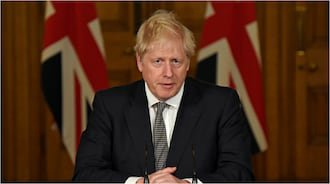 Premier League action will continue despite the entire UK going into a fresh one month lockdown which will be imposed from the early hours of November 5, lasting until December 2.

There is continued rise in coronavirus cases in the country and the government is taking fresh measures to curb the spread.

The Prime Minister made fresh announcements as regards the set of guidelines similar to the one that was adopted when the country went into lockdown earlier in the year.

Recall that in March, the English Premier League was suspended and then the EFL and all footballing programs were put to a halt.

However after cases seemed to be dropping, Project Restart signaled the resumption of the top two divisions after a three-month absence, with Liverpool going on to wrap up their first title in 30 years.

Mirror are reporting that the Prime Minister gave a go ahead for football during a delayed news conference.

“Yes to the Premier League,” when the question of the season resuming was asked.

Immediately the press conference ended, Oliver Dowen who the Secretary of State for Digital, Culture, Media and Sport, explained the new guidelines and it’s impact. He posted:

“The changes mean people should WFH (work from home) where possible.
“But where this is not possible, travel to a place of work will be permitted – e.g. this includes (but not exhaustive) elite sport played behind closed doors, film & tv production, telecoms workers.”