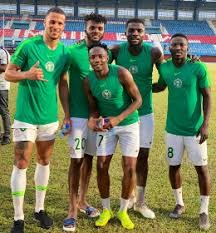 The Turkish giants have never hidden their affection for Nigeria’s Monaco forward Henry Onyekuru, but with the Ligue 1 side not interested in letting go of the former Eupen star, the Yellow-and-Reds have switched their attentions to his international captain

Galatasaray are keen on signing Super Eagles skipper Ahmed Musa, who has been without a club since terminating his contract with Saudi Arabia’s Al Nassr last month.

Musa has been a journeyman of football since he moved to Europe as a teenager following a brilliant campaign in the Nigeria Professional Football League with Kano Pillars.

The 27-year-old forward began his European sojourn in the Netherlands, starred for CSKA Moscow in Russia before securing a dream move to Leicester City in England following their Premier League triumph in 2016.

Musa, however, moved to the Middle East after failing to secure regular playing time at Leicester City.

In his debut season in Saudi Arabia, the ex-VV Venlo attacker contributed seven goals in 24 matches to help the Globals win the top-flight title and the Saudi Super Cup.

His time with Al Nassr was prematurely brought to a halt a few days ago, which may be unconnected with Musa’s struggles for goals in the Saudi Professional League this term. He played 17 league games, including 13 starts without finding the back of the net for Al Nassr.

But according to Hakimiyet, Turkey may be the Nigeria international’s next destination, with Galatasaray reportedly keen on his services.

Musa is expected to skipper the Super Eagles as they trade tackles with Sierra Leone next week in an Afcon qualifying match scheduled to be played in Benin City.