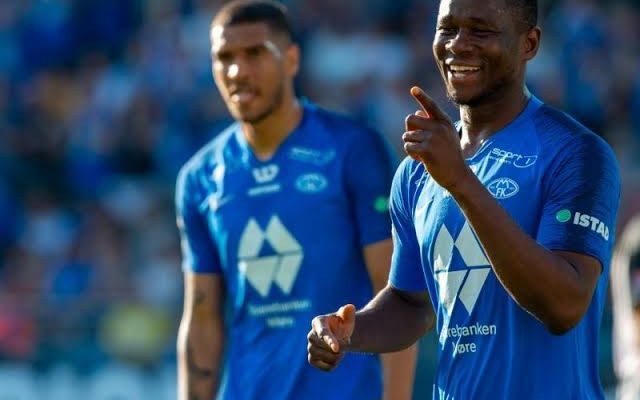 Mikel Arteta’s men have claimed wins in each of their two games played in the Europa League, but the Gunners would be smart to be wary of the attacking threat of Nigeria’s Leke James and Norway’s Ohi Omoijuanfo on Thursday

Arsenal will look to make it three wins in three when they host Norwegian side, Molde, at the Emirates Stadium today, but their opponents boast a robust forward line that can cause the Premier League club a lot of troubles.

The Gunners opened their European campaign with a come-from-behind 2-1 win at Rapid Vienna before thrashing Dundalk 3-0 last week.

An impressive 1-0 victory over rivals Manchester United at Old Trafford at the weekend set them in the best mood for a tie they come in for as huge favourites.

But their modest guests on Thursday, Molde, will be silently confident in their ability to cause an upset at the home ground of their more illustrious foes.

The Norwegian champions have forwards in form. Nigerian forward Leke James has been their star performer so far this term.

The Super Eagles hopeful scored twice in the Champions League qualifiers, has nine league goals and will be rearing to make the headlines against Arsenal.

James is perfectly complemented in the attack by Norway international Ohi Omoijuanfo. Omoijuanfo, born to a Nigerian father, has fired in seven league goals and three in Europe for Molde and will fancy adding to that tally against Arteta’s side.

It promises to be a lively encounter which the Gunners are expected to win, but don’t bet against Molde notching a goal or two at the Emirates.

CHECK IT OUT:  WE ARE SHOCKED! Chelsea Release Statement After Petr Cech Joined A Hockey Team