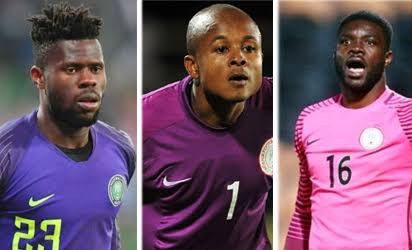 After a barren period following the premature retirement of former Wolverhampton man Carl Ikeme, the Nigerian national team suddenly have a clutch of young and experienced goalkeepers jostling for the team’s number one spot

Super Eagles head coach Gernot Rohr has challenged newly invited goalkeeper Sebastian Osigwe to aim to be the number one goalkeeper of the national team as the team does not currently have a first-choice goalie.

Several goalkeepers have handled the post for the three-time African champions in recent times with mixed results.

NPFL-based Ikechukwu Ezenwa was the first-choice goalkeeper during the qualifying series of the 2018 FIFA World Cup, but youngster Francis Uzoho was the preferred choice during the tournament proper.

South Africa-based Daniel Akpeyi handled the gloves for Nigeria at last year’s African Cup of Nations tournament, where the Super Eagles were stopped at the semifinals by eventual winners Algeria.

But Sparta Rotterdam’s shot-stopper Maduka Okoye impressed when keeping the goal for Nigeria during last months’ friendly matches against Algeria and Tunisia.

With Uzoho not back to full fitness after recuperating from a long-term injury and Ezenwa inactive since the coronavirus pandemic shut down the NPFL, Rohr extended a first senior call-up to former Flying Eagles goalkeeper Osigwe.

And the German tactician expects the addition of the Lugano safe-hands to give more competition to the goalkeeping role.

“We have followed the career of Osigwe right from his days in the U20, where he played for the Austrian national youth team before moving to Switzerland. He’s been given a chance based on his good performances,” the coach told Brila FM.

“Right now is the time for him to show us in training what he can offer, then we will see if the opportunity will be given to him based on his performances.”

CHECK IT OUT:  #BBNaija: Omashola And Frodd Get N1million From Arla Nigeria (Photo)

Rohr maintains he is open to giving more opportunities to quality Nigerian goalkeepers home and abroad, as the Super Eagles are yet to have a substantive first-choice goalkeeper.

“We have no number one goalkeeper from the few last matches we have played,” the former Gabon coach said.

“We have the return of Daniel Akpeyi, and unfortunately, Ezenwa is not playing in the league right now.

“We can’t pretend when things are not right, and then, we will see the guys that will have quality times with the team will have the call up back to the national team.”

Nigeria face Sierra Leone on Friday, November 13 at the Samuel Ogbemudia Stadium in Benin City and take on the same foe in Freetown four days later.