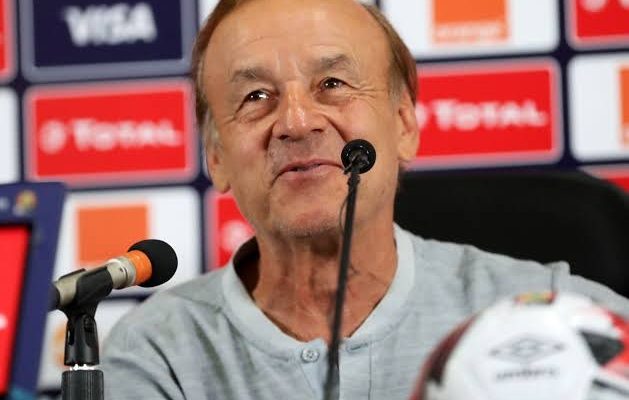 Nigeria are the big favourites ahead of Friday’s clash against their West African neighbours, but their German tactician is staying humble and warning against complacency

Super Eagles head coach Gernot Rohr has warned that he knows enough of the Sierra Leonean national team to admit that they are a dangerous side that can cause a lot of trouble on their day.

Nigeria have won six points, sit top of Group L in the Afcon qualifying series, and know that a victory over Sierra Leone would edge them closer to sealing their place at Cameroon 2022.

But they face a Leone Stars team boosted by the return of two of their biggest stars.

Captain Umaru Bangura – who has recently recovered from COVID-19 – has shrugged off concerns over his fitness to make himself available for Friday’s clash.

And John Kester’s side welcomes legendary striker Kei Kamara back to the squad after the 36-year-old reversed his decision to retire.

Kamara is one of only ten players to have scored 100 goals in MLS history, achieving the landmark in 300 appearances, and is currently fifth on MLS’s all-time scoring list.

The Minnesota United man is set to start up top against Nigeria, and Rohr has highlighted the danger posed by the ageless forward and his teammates drawn from the Championship, Major League Soccer, Segunda Division B, and Belgian Pro League.

“It (Sierra Leone) is not a small team. We have to stay humble. We have to recognize that all the teams now are well prepared,” Rohr told the media at Thursday’s press conference.

CHECK IT OUT:  ‘Obasanjo Travelled More Than Buhari’ – Adams Oshiomhole

“They have players playing very well, in the USA, for example, Kei Kamara, he’s a great player, they have players in Switzerland, Spain and big football countries so we really cannot underrate.

“We are at home without the 12th man, so we have to be strong in our communication, in our passion, and it won’t be easy because we didn’t play here in these African conditions for a long time – one year now.

“The players are coming back from Europe, the cold weather to the hot weather here, African conditions, long traveling, it’s not easy to play again one year after.

“Don’t forget the particular circumstances we have at the moment, so we need to play simple football, we need to go straight on the goal, we would like to score a goal quickly if possible, but sometimes we have to be patient, to stay calm if the goals are not coming quickly.”

The Leone Stars did not prepare for November’s game in optimal fashion as they suffered friendly defeats to Mauritania and Niger last month.

Still, Rohr noted that the defence is Sierra Leone’s strongest area and pinpointed that two of the standout attributes of their players is height and physicality.

“They have a good defence. They are very strong physically; we know a lot about Sierra Leone because our staff prepared it a long time ago.

“We have videos. I had to call the coach of Mauritania, Corentin Martins, he’s a friend, they played against them last month, he told me it’s a very good team.

CHECK IT OUT:  ITS HAPPENING! Jose Mourinho In Shocking Return To His Former Club

“We know it will be a physical match. West African players often are strong physically, big height, they have six players more than 1.85m.”

Rohr noted that Sierra Leone would be looking to frustrate the Super Eagles by using their effective long-ball tactics.

“They like to do long balls and to go on headers, which is not our kind of football, but we have to be ready for this challenge, and I think we will even if the time is short.”

Since their first meeting in 1961, which ended in a 4-2 Nigerian win, the 1994 African champions have maintained a grip-like superiority over their West African neighbours.

The two nations have met at the international level 14 times, with Nigeria winning nine games and losing two.