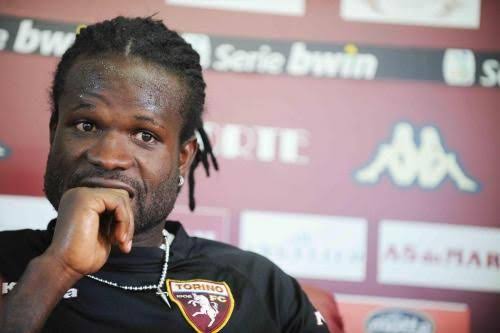 Obodo, 36, was abducted by the gunmen when he stopped by to buy bananas on Sunday, the Police Public Relations Officer, Delta State Command, Onome Onovawakpoyeya, told The PUNCH.

“Obodo was kidnapped at about 5pm on Sunday around Ishaka Hotel just along Refinery Road,” Onovawakpoyeya told The PUNCH.

“He was with his girlfriend when he was abducted. They both stopped by the road to buy bananas.”

She added that no demand has been made for his release.

This is the second time the former Udinese midfielder has been kidnapped by gunmen.

The former Nigeria international was abducted by unknown gunmen on June 9, 2012, on his way to church in Warri.

But the day after he was taken, police tracked his abductors to Isoko, just outside Warri, where they found Obodo and arrested some suspects.

The 2006 AFCON bronze medallist, who described his ordeal eight years ago as a “terrible experience”, miraculously escaped from the abductors, before nearby villagers and a vigilante group, rescued him and informed the police, who trailed the abductors to Isoko.

Europe-based footballers and their relatives have been a target of kidnappers in recent years.

Ex-Eagles defender Onyekachi Apam was kidnapped by armed men in 2007, while an elder brother of former Eagles captain Joseph Yobo was abducted in oil-rich Port Harcourt before being released 10 days later in 2018.

In 2019, the father of former Eagles captain Mikel Obi was also abducted in Jos, but was rescued by police days later.

CHECK IT OUT:  Breaking! Outrage As Ganduje’s Aide Asks Emir Sanusi To Shut Up

She was released after spending six days in the kidnappers’ den.