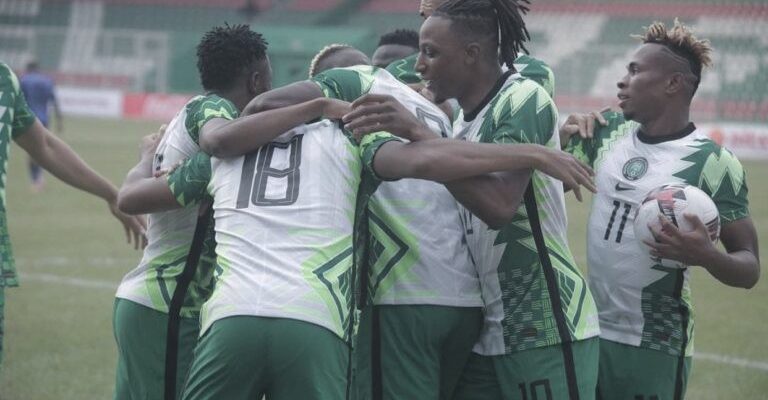 The first leg of this fixture in Benin City last week served up one of the most astonishing comebacks in African football history when the world’s 120th best national team rose from certain defeat to stun their hosts and three-time African champions, Nigeria.

But can Sierra Leone finish the job they started on Friday by securing a win over the Super Eagles and throwing Group L wide open?

Eagles Out For Blood

Victor Osimhen, Samu Chukwueze, and Alex Iwobi (2) put the Super Eagles 4-0 up inside the first 30 minutes and on course for a huge win inside the Samuel Ogbemudia Stadium. Still, Gernot Rohr’s men collapsed in the second half after waves and waves of Sierra Leonean attacks.

Kwame Quee reduced the deficit to 4-1 just before half time, with Mustapha Bundu and Alhaji Kamara (2) coming off the bench to complete an incredible comeback.

That draw denied Nigeria the chance to extend their 100% start to the qualification, but Africa’s fourth-best football team still sits atop Group L with seven points and remains on course to make it to Cameroon 2021.

The Super Eagles will be out for blood in Freetown on Tuesday, keen to show the world that the Benin City disaster-class was a one-off.

The Leone Stars, however, have tasted blood and would have seen that their illustrious opponents are beatable.

Before Friday’s game in Nigeria, Sierra Leone had not scored four goals in a game in over eight years, a 4-2 defeat of Sao Tome and Principe in an Africa Cup of Nations qualifier.

CHECK IT OUT:  Caption This Photo Of Don Jazzy Eating (Best Comment Wins)

Now they know they can hurt the Super Eagles and will target a win on home soil straight from kickoff.

John Keister’s men have just two points from three games played so far and will be out of the running for an appearance at the next Afcon should they lose this match to Nigeria and the Benin Republic pick up a positive result in Lesotho.

The Lone Stars are thus super motivated for Tuesday’s faceoff.

Nigeria are without the talents of Napoli’s Victor Osimhen after the young striker dislocated his shoulder in the first leg.

Either of Genk’s Paul Onuachu or Leicester City’s Kelechi Iheanacho could deputize for the former Lille target man.

Goalkeeper Maduka Okoye shipped four goals in his first competitive game for Nigeria, and the Sparta Rotterdam shot-stopper may be replaced in the starting lineup by Kaizer Chiefs Daniel Akpeyi.

The trio of Rangers Leon Balogun, Villarreal’s Samuel Chukwueze, and Club Brugge’s Emmanuel Dennis are carrying various degrees of injuries. Still, the former two are expected to shrug off the knocks and make the matchday eleven.

The absence of a traditional defensive midfielder exposed Nigeria’s defence last week. Rohr may draft in West Brom’s Semi Ajayi – in the absence of Wilfred Ndidi and Frank Onyeka – to play the holding midfielder role.

CHECK IT OUT:  RUGA: What’ll Happen To Fulani Herders In Southeast – IPOB Reveals

The Super Eagles are still favourites to defeat their hosts, but the Leone Stars have shown they have a massive fighting spirit in them.

Gernot Rohr’s primary aim would be to avoid another shambolic performance in defence, which may result in a cagey and low-scoring affair in Freetown.

For betters, both teams to score appears the safe route to go but except Nigeria to scrape a close encounter in a 2-1 win.