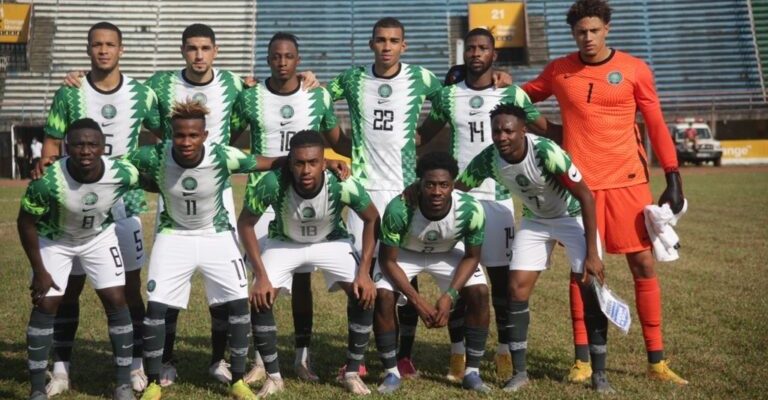 With the Benin Republic picking up a point in Lesotho with a 0-0 draw earlier in the day, the Super Eagles knew a win in Freetown would guarantee passage to next year’s African Cup of Nations tournament with two games to spare.

But the three-time African champions could not muster a winning goal as the two teams that scored eight goals between them four days ago could only play out a 0-0 draw on Tuesday.

Nigeria stay on top of Group L with eight points, one better than Benin Republic and five ahead of Sierra Leone. One win in any of their final two games will see Gernot Rohr’s men earn their spot at Cameroon 2021.

But how did the Super Eagles performed at the National Stadium in Freetown?/

The Sparta Rotterdam goalkeeper retained his starting shirt, his second competitive game for the Super Eagles, despite conceding four times against the same opponents last Friday.

And Okoye was impressive all evening, showing clean hands and good positioning to produce two routine saves in the opening half and keeping his composure in the second half.

It is a surprise that the Hoffenheim defender started again ahead of FC Twente’s Tyronne Ebuehi after an uninspiring performance in the first leg of the fixture.

Akpoguma never really showed his best at right-back, and Chidozie Awaziem replaced him in the 74th-minute.

The Rangers defender picked up a knock in the first leg and was doubtful for this encounter, but he shrugged off injury concerns to start in Freetown.

CHECK IT OUT:  Nigeria Overtakes Egypt As Largest Rice Producer In Africa

Balogun’s presence gave the Eagles’ defence an assured look, and the former Mainz defender made a timely clearance midway into the first half to keep the scoreline goalless.

Troost-Ekong marshalled a defence line that shipped four in Benin City four days ago, but coach Gernot Rohr retained him for this return fixture.

After sitting out the first leg, the Fulham fullback got the nod ahead of FC Porto man Zaidu Sanusi, and he helped Nigeria keep a clean sheet in the first 45 minutes.

The Galatasaray midfielder could not force his influence on the game in the first half, mostly due to the poor state of the pitch inside the National Stadium in Freetown.

Etebo then appeared to pull his hamstring after the hour mark, and he was replaced by fullback-cum-midfielder Abdullahi Shehu.

The Rangers ace was deeply yet again at the base of the Super Eagles midfield together with Oghenekaro Etebo, but the duo didn’t play as progressively as they should have.

Aribo attempted – and completed – too many sideways passes in a first half where the two teams cancelled each other out.
Replaced late on by Semi Ajayi.

The Everton playmaker struggled in the first 45 minutes just like his compatriots on the terrible Sierra Leonean pitch but combined well with Iheanacho after the interval.

Iwobi created the Nigerian goal that was disallowed on the hour-mark.

The former Arsenal man – later spotted to be in an offside position – delivered the cross, which Iheanacho sent into the net with a simple header.

Iwobi missed a couple of half-chances to open the scoring for Gernot Rohr’s men.

The free-agent got Nigeria’s first shot on target from a freekick after just four minutes, which the Sierra Leone goalkeeper gathered with ease.

The Villarreal winger was the other injury doubt who still recovered well enough to make Gernot Rohr’s starting eleven.

Chukwueze offered Nigeria an outlet on the wings, but the youngster could not get a first-half shot on target from the edge of the box.

After a relatively quiet first-half, the Leicester City star great the game’s first decent chance minutes after the break, but he missed when well-placed after Chukwueze set him up nicely.

Iheanacho also had a goal ruled off after Iwobi was adjudged to be in an offside position before sending in the cross that Iheanacho headed in.

He collided with an opposing defender late on and was replaced by Club Brugge’s Emmanuel Dennis.

The former Manchester City man was probably Nigeria’s best player of the evening.