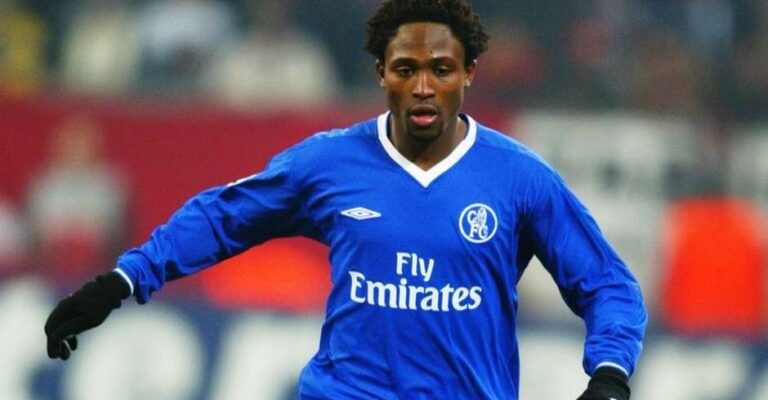 The former Nigerian international is the youngest player to play in Europe’s biggest club competition, but he could see his record broken on Tuesday night

Borussia Dortmund youngster, Youssoufa Moukoko, is on course to be the youngest player to play in a UEFA Champions League match, breaking the record set by former Super Eagles star, Celestine Babayaro.

At the age of 16 years and 86 days, Babayaro became the youngest player in a Champions League game when he featured for Anderlecht against Steaua Bucaresti 26-years ago.

Since then, the record has remained with no one coming close. However, that could all change tonight after Cameroonian born Moukoko was named in Dortmund’s squad that will face Club Brugge.

Moukoko was born in Cameroon’s capital, Yaounde, but grew up in Germany and has represented the country at youth level.

He joined Dortmund’s U-17 as a 12-year-old, scoring 40 goals in his first season before adding another ten in his second season.

Last weekend,  at the age of 16 years and one day, Moukoko became the youngest player to play a match in the Bundesliga as Dortmund’s beat Hertha Berlin.

And should he in tonight’s Champions League clash against Club, he will break Babayaro’s longstanding record in the competition.

Meanwhile, Super Eagles star Emmanuel Dennis will not feature for Club after he walked off the team’s bus travelling to Germany.

According to reports, Dennis walked off after he was asked not to sit on some of the seats that were marked as a precaution against Covid-19.

The 22-year-old scored in Club Brugge’s opening day win over Zenith St Petersburg, but he won’t get the opportunity to add to his tally tonight.