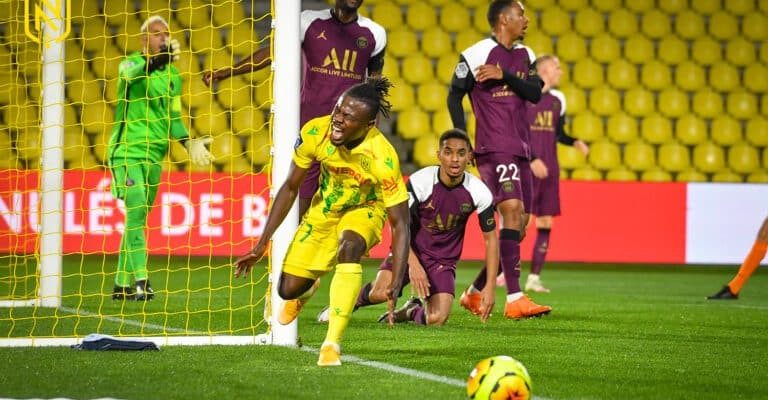 The Nigeria international winger missed the last five matches combined for club and country, but he is in line to make a return in a Ligue 1 clash on Saturday

Super Eagles star Moses Simon has returned from a thigh muscle strain that has kept him out of action for a few weeks, says a delighted Nantes manager Christian Gourcuff.

But Nantes face another tricky Ligue 1 clash against Marseille on Saturday, and coach Gourcuff could not hide his delight that the club’s Player of the Year last term is ready to help cage Andre Villas-Boas’ men.

“The good news, which was expected, is the return of Moses Simon, who will travel to Marseille,” Gourcuff said in a pre-match press conference.

“No additional problems to report. Charles [Traore] is still unavailable. We will have to see his physical condition in a few days.”

Simon remains a crucial member of the Canaries despite still not hitting last year’s dizzy heights that saw him named as the club’s best player while on loan from Levante.

The fast winger has made eight appearances this term, scoring one goal and providing one assist.

But Nantes continue to struggle to get their league campaign on track, with Gourcuff’s side sat 14th on the Ligue 1 table after gathering 13 points from 11 games.

CHECK IT OUT:  PHOTOS: Man Banished For Impregnating Daughter Twice In Anambra