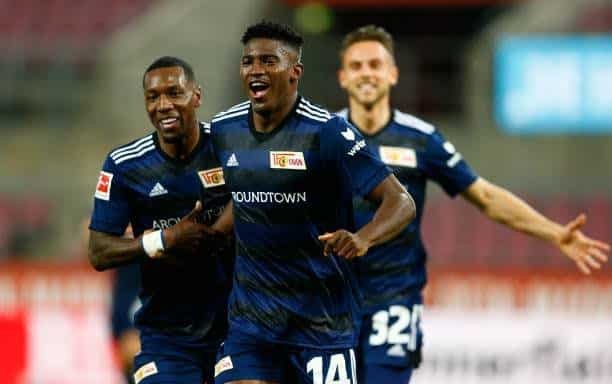 The Nigerian forward got his name on the scorer’s sheet, but it was not enough to help his German club avoid defeat in matchday ten of the Bundesliga

Taiwo Awoniyi opened the scoring at the Olympiastadion Berlin, but Hertha Berlin fought back impressively to hand a 3-1 defeat to local rivals Union Berlin on Friday night.

Awoniyi converted a Marcus Ingvartsen pass in the 20th-minute to give the visitors the lead heading into the break.

However, three second-half goals from Pekarik and Piatek (twice) condemned Union Berlin to their first defeat in nine league matches.

A first-half red card to Union’s star Robert Andrich did not help the visitor’s cause, though.

Nigerian forward, Awoniyi, on loan from Liverpool, now has two Bundesliga goals to his name this term, having found the back of the net against Cologne a fortnight ago.

In Belgium, Paul Mukairu impressed for Anderlecht, but it was not enough to help Anderlecht claim all the points at Zulte Waregem.

Nigerian forward Mukairu provided an assist as Vincent Kompany’s men could only manage a 2-2 draw inside the Regenboog Stadion on Friday evening.

CHECK IT OUT:  BREAKING! Real Madrid Planning To Splash The Clash To Sign Liverpool Star Salah