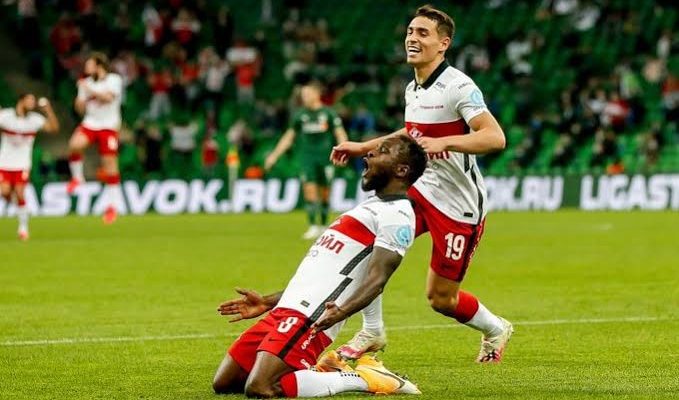 On-loan Chelsea midfielder Victor Moses featured for 84 minutes to help Spartak Moscow see off the challenge of struggling Tambov with a 5-1 thrashing at the Otkrytiye Arena in Moscow on Saturday.

Jordan Larsson’s 27th-minute strike for the hosts was the difference between the two teams at halftime, but Larsson’s second of the game and Gigot’s late effort sandwiched between an Ezequiel Ponce double powered Spartak to a massive win.

German Onugkha grabbed the consolation goal for the visitors after the hour-mark when scores still stood at 2-nil.

The win pushes Spartak Moscow past the duo of Zenit St. Petersburg and Chidera Ejuke’s CSKA Moscow to the top of the Russian Premier League table.

The title rivals can, however, return to the championship summit with a win each in their respective games this weekend.

Moses, who joined Domenico Tedesco’s side from English giants Chelsea this summer, has played seven league matches for the Moscovites, scoring once.

CHECK IT OUT:  SO SAD!!! Consultant Physician Dies While Trying To Save Electrocuted Neighbor