What Next For Henry Onyekuru? - NaijaCover.Com
Skip to content 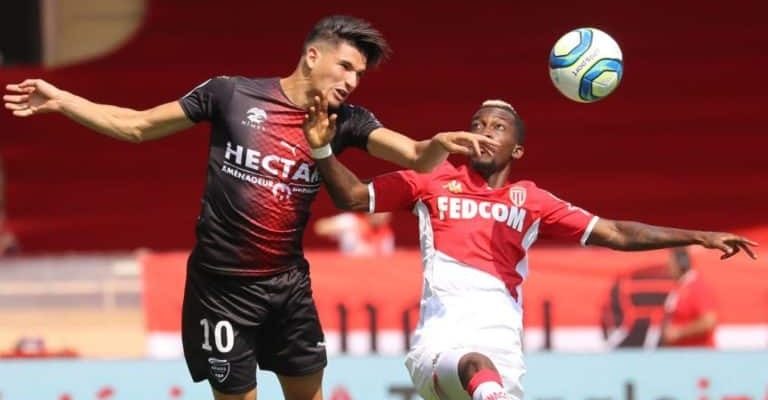 Paul Onuachu has been grabbing the headlines in the Belgian top-flight this season due to his brilliant displays for Genk.

But before the former Midtjylland star arrived in Belgium, there was another Nigerian, that had taken the Jupiler League by storm, and his name is Henry Onyekuru.

Onyekuru started his career with the famous Aspire Academy, and after his time at the academy, he signed for Belgian side, KAS Eupen in 2015.

While it takes time for some players to settle down at a new club, Onyekuru never had the problem at Eupen, scoring six goals in 19 league appearances to help Eupen gain promotion to the Belgian top-flight.

In his first season in the Belgian top-flight, Onyekuru scored 22 goals and registered nine assists in 38 league games for the Pandas.

His exploits that season caught the attention of many top clubs, and it was not a surprise to see him leave Eupen and sign for Everton in 2017.

But he could not feature for the Toffees and was immediately loaned back to Belgium with Anderlecht. He continued from where he left off, scoring ten goals in his first 28 matches for the Purple and White.

However, his time at the club ended earlier than expected after suffering a knee injury that ruled him out of the rest of the campaign.

After recovering from his injury, Onyekuru was once again sent out on loan, but this time to Galatasaray in Turkey.

The Super Eagles star’s time with the Lions was a success despite the career-threatening injury he suffered during his time at Anderlecht.

Onyekuru scored 14 league goals and a further two in the Turkish Cup to help Galatasaray secure a league and cup double.

Following that campaign, it was hoped that Galatasaray would sign him on a permanent deal, but the Turkish club could not agree a deal with Everton, and Onyekuru had to return to Merseyside.

But he would eventually leave that summer, as Monaco paid £12.5 million to secure the services of the Nigerian permanently.

However, his time at the Principality club has not gone according to plan, and his career is currently at a crossroad.

In the 2019/2020 season, which was his first campaign with Les Monégasques, Onyekuru only featured in just four league games before he was sent out on loan to Galatasaray again last January.

Although injuries did not help his cause last season, it was believed the move to the Lions would help him regain his form, having found success in his first spell at the club.

But the Super Eagles star could only manage just one goal, and two assists in 12 games for the Faith Terim led side.  Nonetheless, he returned to Monaco in bullish mood, saying he is hoping for a fresh start this season.

“Monaco are a big club they know how to work with their players when it comes to transfers, just look at Anthony Martial, Onyekuru told BBC just before the start of the season.

“I hope to make a good season or two, and hopefully the future will be bright,” he added.

The Nigerian international was also backed earlier this season by his manager, Niko Kovac, who said Onyekuru’s time would come.

CHECK IT OUT:  Husband Kills Wife Weeks After She Told Friends To Make Their Marriages Work (Photo)

“For everyone on the bench, Onyekuru’s turn will also come,” the Monaco boss said, as per The Hurriyet.

“We are in a very long marathon. We have a young team, and we will consider everyone. There are at most 45 matches waiting for us.

But with just four appearances this season and the Ligue 1 campaign almost at the half-way stage, Onyekuru will need to chart a new course for his career this January.

Just only 23, the Nigerian international still has enough time to start afresh, but he needs to get it right this time as he may not have another opportunity.

The ex-Anderlecht star is expected to leave Monaco when the January window opens and has been linked with a  move back to Turkey, while Bundesliga clubs are also interested in taking him on loan.

While a loan looks like the likely option, it’s crucial Onyekuru moves to a club where he will get enough opportunities to prove himself.

The 23-year-old is talented; he only needs the trust of a manager that believes in his abilities and ready to give him enough chances to prove himself.

He had that in Faith Terim while at Galatasaray, and that could be an option. A move to Germany could also help him get back his confidence given the number of youngsters thriving in the Bundesliga right now.

Another option is a move back to where it all started for him, Belgium. Nigerian players have always found success in the Belgium top-flight, and Onyekuru himself is one of those players.

It may not be one of the top five European Leagues, but it could be the step in the right direction. He’s approaching an age where he needs to play regularly, and the Jupiler League offer him that chance.

CHECK IT OUT:  Don Jazzy Finally Reveals Why He Is Yet To Get Married

Onyekuru has not had it easy in recent years, but with the right move in January, he can regain his best form again.