Taiwo Awoniyi Is Gradually Finding His Feet But What Does The Future Hold For Him? - NaijaCover.Com
Skip to content 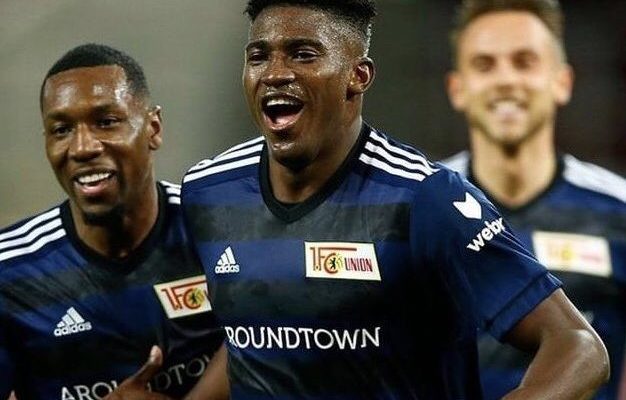 The former Golden Eaglets and Flying Eagles striker has endured a difficult start to his senior professional career, but he is turning it around gradually

Taiwo Awoniyi came to public consciousness in 2013, when he and the rest of Nigeria’s Golden Eaglets team took the world by storm to win the FIFA U-17 World Cup in the United Arab Emirates.

While Kelechi Iheanacho was the golden boy of that team, Awoniyi was the able deputy as his four goals helped Nigeria to her fourth world title at U-17 level.

Shortly after the tournament, the two players were in high demand, but it was Iheanacho that secured a move almost immediately, signing for Manchester City in 2014.

Nonetheless,  Awoniyi would also get his dream move two years later as he signed for Premier League champions, Liverpool.

But he could not feature for the Reds due to his lack of work permit and was loaned to FSV Frankfurt in Germany. It was hoped the move would prepare him for the time he is finally ready to play for Liverpool.

However, more than five years later, Awoniyi is yet to feature for Liverpool and has had loan stints at different clubs across Europe.

But the constant loan moves have done more harm than good for the 22-year-old’s career. Aside from his time at Mouscron, Awoniyi was limited to a few opportunities at other clubs. He found it hard to earn the trust of most of the managers, and that affected his development and confidence.

CHECK IT OUT:  ‘We Will Respect Hazard If He Leaves Chelsea’- Azpilicueta

It, however, that has changed this season with the Nigerian international finally gaining his feet at Bundesliga club, Union Berlin.

After leaving Mainz last season, Awoniyi returned to Liverpool, who once again loaned him back to Germany, but this time to Union Berlin.

The capital side are punching above their weights in the German top-flight,  sitting sixth with 18 points from 12 games.

Awoniyi has played a vital role in the  Eisern Union’s incredible start to the Bundesliga campaign, finding the back of the net three times in ten league appearance.  Unlike his previous loan spells, he has been given enough opportunities by Union manager- Urs Fischer.

Although he has also benefitted from injuries to two of Union main strikers, Anthony Ujah and Joel Pohjanpalo, his relationship with Fischer has helped him settle down quickly at the club.  The 22-year-old has started seven league games this season, playing for the entire duration on three occasions.

Aside from his three goals, Awoniyi also has one assist to his name- although he also has to improve on his conversion rate, having missed three big chances this season.

But while his career is finally kicking off, question marks still surround Awoniyi’s longterm future. The 22-year-old’s contract at Anfield expires in 2023, but he recently revealed he intends to leave the club permanently.

“It is my dream to play for Liverpool. But me playing for Liverpool has to do with getting my work permit,” Awoniyi told ESPN per Soccernet

“Without it, there is no chance for me discussing about playing for Liverpool for now.

CHECK IT OUT:  “I Don’t Have Any Child Out Of Wedlock” – Don Jazzy

“This season was maybe a bit tough to make the decision because honestly, I was hoping to leave permanently.

However, while leaving Liverpool for good is the right move for him, it remains to be seen if Union would be willing to sign him permanently.

Despite his brilliant start at the club, there’s still a lot of the season to go, and that could play a part in the German club’s decision.  A lot also depends on the price tag Liverpool place on him and if it is something Union can afford.

But what’s most important right now is for Awoniyi to continue to improve and he won’t be short of suitors next summer.

He has not found it easy, but this could be the start of a promising career.