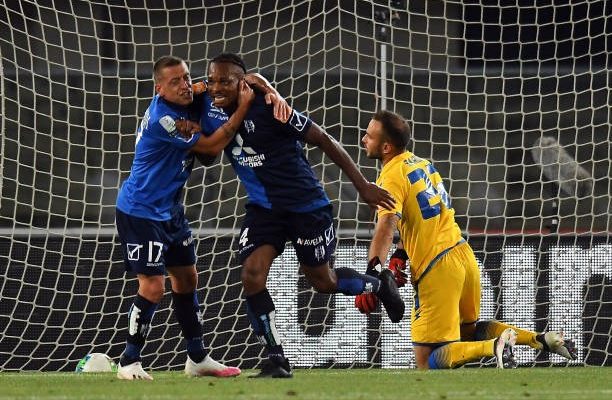 Several Nigerian football stars were involved in games for their clubs on Saturday, with a few deserving special applause for finding the back of the net

In the English Championship, Reading succumbed to a 3-1 defeat at Brentford with the Royals’ consolation goal coming off the boots of Sone Aluko.

Jensen’s opener coupled with a Mbeumo double gave the hosts a three-goal advantage at the Brentford Community Stadium inside the opening half hour.

But talented youngster of Nigerian descent Michael Olise combined with Aluko midway into the second half to earn a bit of respect for Reading.

Super Falcons forward Asisat Oshoala continued to dazzle in the Spanish Primera Division Femenina, as she contributed a goal and two assists in Barcelona’s 6-0 thrashing of Sevilla.

Former Super Eagles star Joel Obi got his first Serie B goal in six months as Chievo were held to a 1-1 draw at home to Empoli.

The 29-year-old midfielder last found the back of the net in June when Chievo forced a 2-0 defeat down the throat of Frosinone.

But Obi was back on the scorer’s sheet, with the former Inter Milan man breaking the deadlock for the hosts at the Stadio Marc’Antonio Bentegodi.

La Mantia’s close finish in the second half, however, ensured that Empoli left Verona with a share of the points.

Simy Nwankwo continues to fly the Nigerian flag high in the Italian Serie A, with the Super Eagles striker netting his fourth goal of the campaign in Crotone’s 3-1 loss at Sampdoria.

Simy’s goal at the Stadio Comunale Luigi Ferraris deep into first-half stoppage time from penalty spot is his 14th strike since he made his Serie A debut seven years ago.