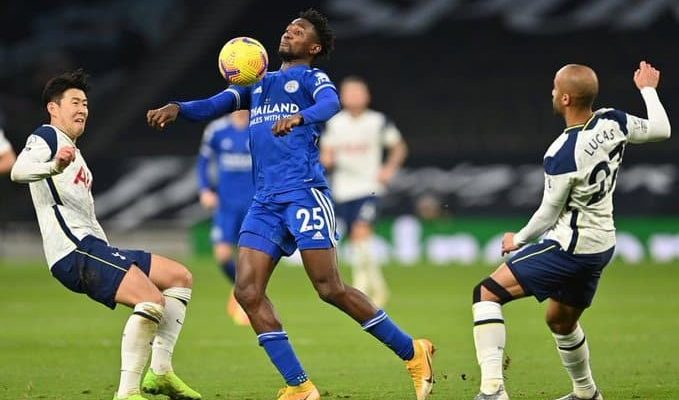 The Super Eagles ace has been immense for the Foxes since returning from an adductor surgery, drawing plaudits from his boss

Leicester City manager Brendan Rodgers has acknowledged that there is no midfielder at the club that performs at the level of Super Eagles midfield general Wilfred Ndidi.

Ndidi was out for a few weeks, missing all of the Foxes’ games in October and November, during which Leicester City suffered a blip.

Brendan Rodgers’ men lost two of the four Premier League matches played without the Nigerian in November, but they have won three of the four games involving the former Gent’s star while keeping two clean sheets.

The highlights of Ndidi’s displays came last weekend when he helped the Foxes claim an impressive 2-0 win at Tottenham Hotspurs.

Dangerman Jamie Vardy had a hand in both goals, scoring one and forcing a Spurs defender to concede an own goal.

But it was Ndidi who was awarded the encounter’s Man-of-the-Match after keeping Tottenham Hotspur’s dangerous duo Harry Kane and Heung-min Son in check.

Leicester City face Manchester United on Saturday in another clash likely to put Ndidi’s ability to the test again.

But the Foxes boss Rodgers is convinced that Ndidi has shown that he is the best central midfielder in his squad while highlighting the qualities of his number 25.

“I’ve said before, he’s irreplaceable. There’s lots of good players that we have that can do that job, but we don’t have anyone that can do it to the level that he does,” the former Liverpool manager told Leicester City’s official webpage.

CHECK IT OUT:  Singer, African China shows off his newly completed luxury house

“His reading of the game, his agility… all the numbers after the [Spurs] game show how good he is in covering space, but it’s also the confidence he gives to the other players.

“He was immense in the game, against a really good midfield. If you think of [Moussa] Sissoko and [Pierre-Emile] Højbjerg that were in there, he was absolutely outstanding.”

Ndidi has never been on the winning team when facing Manchester United since his move to Leicester City in January 2017.

The 24-year-old midfielder has lost six of the seven games played against the Red Devils, drawing the other one.