Israel Adesanya wins Fighter of the Year at the World MMA Awards for the second year in a row - NaijaCover.Com
Skip to content 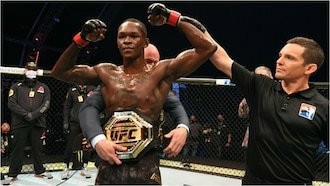 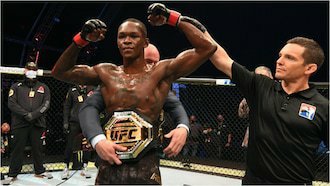 Nigerian-born New Zealand MMA fighter, Israel Adesanya, has been named Fighter of the Year for 2020 at the World MMA Awards.

The UFC Middleweight champion, who has a 20-0 career record after beating both Yoel Romero and Paulo Costa in the Octagon this year, picked up the Charles ‘Mask’ Lewis Fighter of the Year Award, and the prize for International Fighter of the Year on Sunday, December 27, at the 12th edition of the Fighters Only World MMA Awards.

It is the second year in a row that Adesanya has won the award after he won and unified the UFC Middleweight Championship in 2019.

In another news, Adesanya could take on one of his fiercest rivals, Jon Jones, with UFC president Dana White claiming that ‘Bones’ is ready to come out of retirement to fight the Middleweight champion.

Speaking about a potential Adesanya vs Jones fight in 2021, White said: ‘That’s the fight I would love to see.

‘Somebody asked me yesterday, “If you could make one fight in 2021, what would it be?” That’s the fight. That’s my pick.’

The post Israel Adesanya wins Fighter of the Year at the World MMA Awards for the second year in a row appeared first on .

CHECK IT OUT:  ‘Like Osun, APC Will Lose The Presidency’ – Fayose