Odion Ighalo reveals how he used to save lunch money and borrow just to watch Manchester United play - NaijaCover.Com
Skip to content 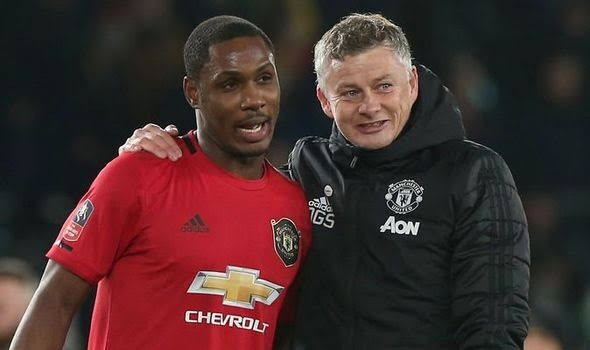 Manchester United and Nigerian striker, Odion Ighalo has spoken of how his love for the Red Devils began.

With just a month left for his contract to expire at Manchester United, Odion Ighalo has spoken to the club’s website, reminiscing how he used to save part of his lunch money many years ago to watch Manchester United’s games at viewing centres in his hometown of Nigeria.

Ighalo, 31-year-old joined Manchester United on loan from Shanghai Shenhua in January 2020, a deal which will see him stay at the club until the end of January 2021.

Born in Ajegunle, Lagos to a poor Edo family, the striker has described how he managed to watch Manchester United’s weekend games back then.

“I grew up in an area where everyone watched Premier League football. You either supported Manchester United or Arsenal or Chelsea back then,” Ighalo told the club website.

“In my house, my brothers, my late sister, they supported Manchester United. I was very young and I didn’t know a lot about football, so when they went to watch the game they would come back and you would see they would be arguing.

“When I grew up, my brother started taking me to the viewing centre to watch Manchester United. That’s how I fell in love with the team, watching Manchester United playing week in, week out.

“It’s a very small place, you would have maybe 100 people, it was very tight and that. “But they don’t care, they just want to watch the football.

“You see people who will pull a stool and stand at the back. On a small chair like this. They don’t care about the inconvenience, they just want to watch their team playing and doing well.”

Ighalo, who has played just nine minutes of Premier League football this season, said he cried when the Red Devils lost games after spending his lunch money to watch them.

CHECK IT OUT:  Pogba Names Manchester United Player Most Likely To Score Own Goal

He continued: “I had to save money. Before you go to school, my mum would leave me some money if I wanted to eat lunch. From Monday I was saving my money because I wanted to watch Manchester United.

“I split it in two. Even though I would use part of the money for lunch, I would save some of the money because the weekend is coming. Sometimes you would be feeling hungry because you don’t eat properly, but you don’t want to miss the game at the weekend.

“You don’t want someone to tell you how Manchester United played, how they scored. You want to see it yourself. It’s that passion. You start saving money until the weekend.

“After Friday when school is done, you see everyone get happy. They get their Manchester United shirt, their Arsenal shirt; you wash it and dry it. Everyone’s getting set for the weekend. It’s like a celebration, like you’re at a party.

CHECK IT OUT:  I REGRET IT! Ex Football Star Michael Owen Reveals Club He Should Not Have Joined