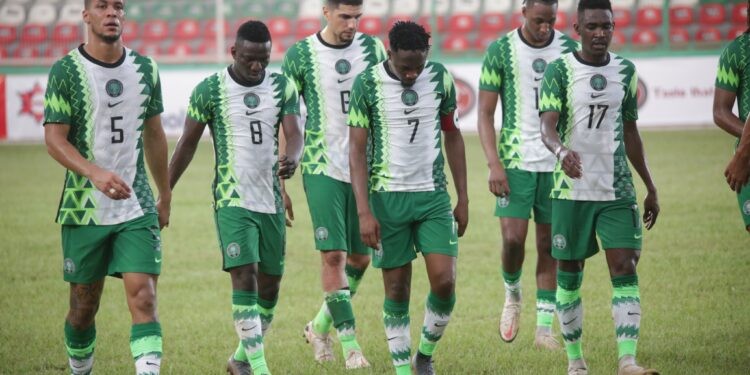 The Super Eagles are scheduled to play their final Africa Cup of Nations Qualifiers in Lagos, but the players are against the decision

Nigeria’s national team coach, Gernot Rohr has revealed that his players prefer to play their Afcon qualifier against Lesotho in Uyo.

Soccernet had earlier reported that the three-time African champions will play their final Afcon qualifier at the Teslim Balogun Stadium in Lagos.

The Super Eagles have not played a game in Lagos since 2011 while it’s almost two decades since they played at the Centre of Excellence.

They played their home games in Abuja National Stadium until it was abandoned for renovation. After leaving Abuja, the team played in Kaduna and Kano temporarily.

However, the Godswill Akpabio Stadium in Uyo became the team’s home 2015, but their last Afcon qualifier was played at the Samuel Ogbemudia Stadium, Benin.

It was hoped the team would return to Uyo for the final qualifier, but that won’t happen as the Teslim Balogun Stadium has been chosen as the venue for the game.

Rohr visited the stadium for inspection last week, but he has now revealed that the team would prefer to play in Uyo.

“The second game, we will do it in Teslim Balogun Stadium in Lagos,” Rohr told ESPN

“We know that this is a very special occasion with the pandemic, and we cannot have the usual [venue in] Uyo.

Nigeria play their final two Afcon qualifiers next month with the team taking on the Benin Republic first before welcoming Lesotho to Lagos.

CHECK IT OUT:  World Cup Referee Accused Of Asking Colleagues For Sex In Exchange For This

The Super Eagles need just a point in either of the two games to seal qualification.