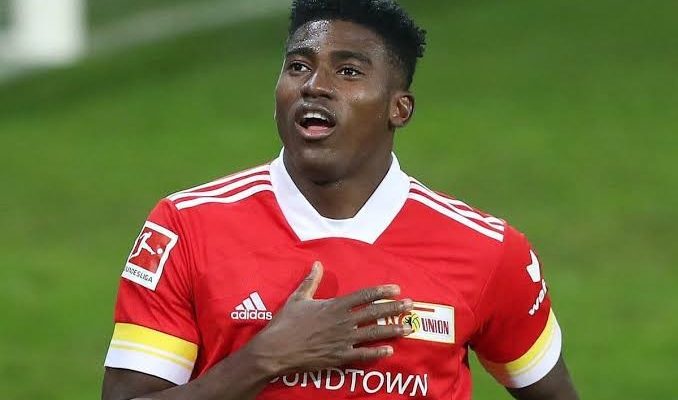 On his third attempt in Germany, the former Golden Eaglets hero is leaving no stone unturned in establishing himself as one of the finest finishers in the country

Union Berlin forward Taiwo Awoniyi has been named among the 12 best strikers in the German Bundesliga, as rated by top publications Kicker as per Bz-Berlin.

Awoniyi is enjoying his most successful spell in Germany after notching five goals in 18 league matches for the Iron Ones.

The youngster’s reputation shot through the sky after he smashed in four goals in five matches before Union Berlin’s 2-0 victory away to Werder Bremen on January 2.

The on-loan Liverpool forward has, however, endured a dry spell since then with his patchy form coinciding with his side’s ugly run.

Union Berlin are currently on a barren four-match winless with the Bundesliga side’s now seven points adrift of the Champions League places.

Still, the 23-year-old has done enough to merit a 10th position among the top 12 strikers in the German top-flight.

Awoniyi’s first European adventure, after helping Nigeria triumph at the 2013 FIFA U17 World Cup at the United Arab Emirates, was at Frankfurt in the 2.Bundesliga 2015/16 season.

After spells in the Netherlands and Belgium, Awoniyi returned to Germany last season with Mainz, where he scored once in 12 attempts.