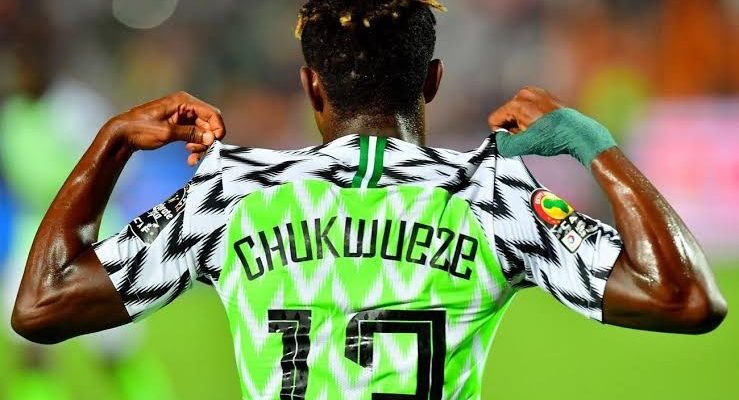 Samuel Chukwueze has recovered from the surgery that has kept him out of action since January and the Super Eagles winger made the Villarreal squad that claimed a fine 2-0 victory at Salzburg on Thursday evening.

Goals either side of halftime from Paco Alcacer and Fer Nino handed the Yellow Submarines the advantage in the first leg of their Europa League knockout round clash against the Austrian giants.

Almost as delightful as that away victory in a potentially tricky tie was the sight of Chukwueze on the substitution bench at the Red Bull Arena.

The 21-year-old has featured in only three matches for Villarreal in 2021, the last of which arrived in his side’s 4-1 drubbing of Celta Vigo at the Abanca-Balaídos on January 8.

And after suffering from a troublesome groin issue, Chukwueze underwent successful surgery in Germany about two weeks ago to relieve his pain.

No return date was fixed at the time but it is clear that the Nigerian international is back to fitness and is ready to get back into the thick of the action.

That should be good music to the ears of Super Eagles head coach Gernot Rohr who is presently drawing up a strategy to ensure Nigeria secure the point needed to guarantee a place at the next edition of the African Cup of Nations in Cameroon.

CHECK IT OUT:  “Breaking A Heart Should Qualify As Murder” – BBNaija’s Tboss

Nigeria trade tackles with the Benin Republic and Lesotho in March.

Chukwueze has been a regular for the Super Eagles since he made his breakthrough during the last Afcon tournament in Egypt.

The 2015 FIFA U-17 World Cup winner, who made his international debut in November 2018, has made 14 appearances for the Nigerian senior team, scoring two goals.