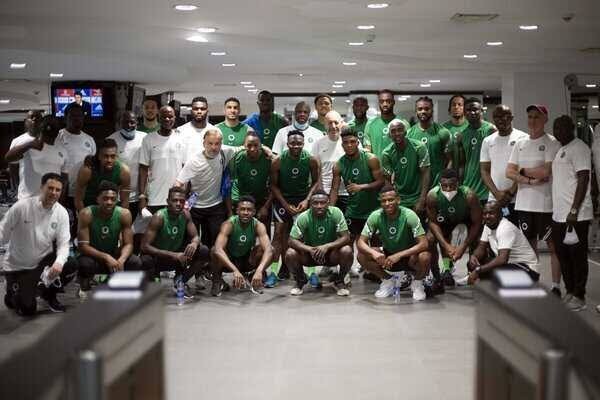 Two Super Eagles stars Joe Aribo and Leon Balogun, have expressed their concerns about travelling on the sea after it was confirmed that Nigeria would travel to Benin by boat for their penultimate 2022 Africa Cup of Nations qualifying game in Porto Novo.

Due to the proximity of the West African countries, the Nigerian Football Federation had been contemplating either going to Benin by road or by boat with support from the Lagos State Government.

After securing the assurance of adequate security, Gernot Rohr’s men, who are currently camped in Lagos, are scheduled to leave the Southwestern part of Nigeria on Friday.

Rangers duo of centre-back Balogun and midfielder Aribo will be a part of the squad that makes the short water trip to Cotonou before moving to Porto Novo on Saturday for the game. The contingent will return to Cotonou after the game and travel back to Lagos on Sunday morning.

And Balogun has admitted that he is surprised by the arrangement but has no problem as long as the team gets to their destination safely.

“I guess we have to be okay with it, I will say it’s a bit unusual, but that’s just how it is,” Balogun said as per the Daily Record.

“The most important thing is that we get there in one piece and win the game.”

In his reaction, Aribo lamented that he had never made a boat trip before but preferred to focus not on the journey but on getting maximum points against the Squirrels.

The former Charlton Athletic man added: “I have never travelled by sea anywhere before.

“Travelling on a boat…it is what it is. We can’t use it as an excuse, and we have to go out and make sure we get the victory.”

Nigeria lead the Group L table after picking up eight points from four matches, and Benin trail the three-time African champions by just a point in second spot.

A win for the Super Eagles at the Charles de Gaulle Stadium in Porto Novo will see the three-time African champions seal the top spot and qualify for Cameroon 2022.