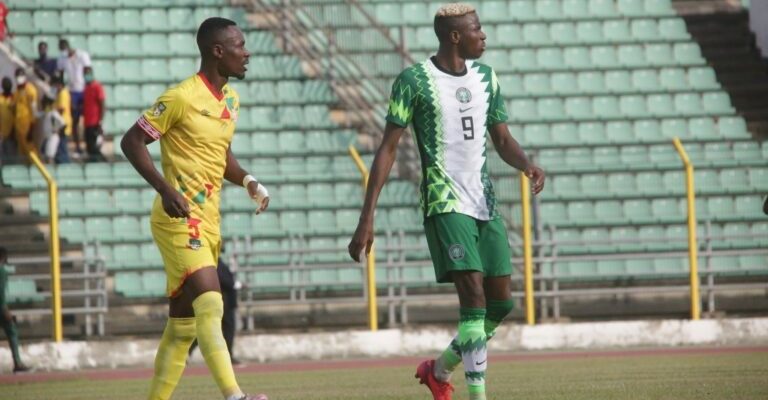 Nigeria secured their place at Cameroon 2022 even before the game in Porto Novo started after Sierra Leone and Lesotho played out a goalless draw in the other group game.

Gernot Rohr left Alex Iwobi out of the starting eleven after the Everton midfielder tested positive for COVID-19, with team captain Ahmed Musa taking his place.

Still, the Super Eagles dominated proceedings from kickoff and could have been three goals up in the opening ten minutes, but Osimhen and Iheanacho failed to capitalise on decent chances.

Osimhen had another opportunity to break the deadlock in the 24th minute, but the Napoli man could only direct his effort straight at the opposing goalie.

Moments later, Onyekuru dazzled his way into the area, but the hosts’ defenders did well to clear the danger for a corner-kick.

Iheanacho then sent an effort over the bar after Onyekuru set him up with a cute pass before the Beninoise goalkeeper came to his side’s rescue when Osimhen was poised to strike.

And just before the referee brought an end to proceedings in the opening period, Onyekuru agonisingly watched his header parried to safety by the goalkeeper.

The Super Eagles picked off where they left off in the second half, with both Chukwueze and Osimhen fluffing early chances to open the scoring.

The best chance of the much at that point arrived in the 56th minute when Osimhen beat the goalkeeper with his low shot but saw his drive hit the upright, only for Zaidu to blast the rebound over the bar.

CHECK IT OUT:  Okada Ban: NANS Urges IGP Adamu To Beef Up Security In Lagos

Head coach Gernot Rohr sensed the need for a composed finisher in the Eagles attack and sent on Genk’s Paul Onuachu for Iheanacho with twenty minutes left on the clock.

A beautiful moment for the Nigeria Professional Football League arrived in the 80th minute when Enyimba’s Anayo Iwuala was introduced for Galatasaray’s Onyekuru.