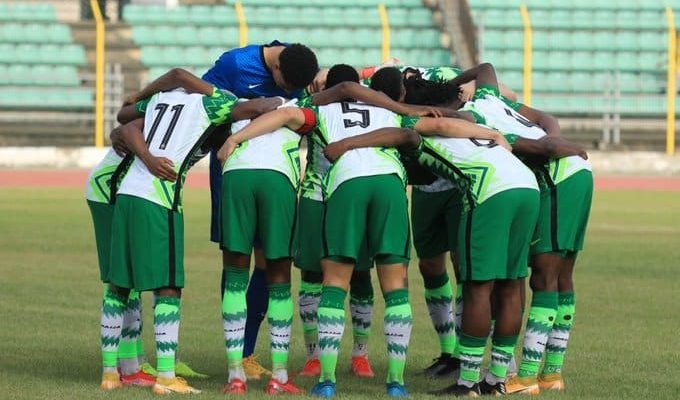 The Genk striker is not Gernot Rohr’s favourite, but he was the hero after he scored a late winner to help Nigeria beat Benin in their Africa Cup of Nations Qualifier at the Charles de Gaulle Stadium

The clash was heading for a draw until Onuachu headed home from a Victor Osimhen shot that had been initially saved.

Although the match did not provide much entertainment, the Super Eagles were good value for their win, judging from the balance of play.

And here is Soccernet’s player ratings from the match.

Maduka Okoye (6): The Sparta Rotterdam did not have much to do, but he was solid when called upon.

Ola Aina (7): One of Nigeria’s best players in the first half. He was the team’s creative outlet in the opening half despite playing as a right-back.

He would’ve been disappointed not to have got an assist after he found Henry Onyekuru with a delightful long ball.

Zaidu Sanusi (6): Another solid performance from the Porto left-back. He was brilliant going forward and solid defensively, although he needs to do better with his crosses.

William Troost Ekong (5): The Super Eagles were rarely threatened at the back, but Ekong’s error almost gifted Benin the opening goal out of nothing.

Leon Balogun (6): The other half of the Oyinbo wall was tidy in possession and did not run away from challenges.

CHECK IT OUT:  TEAM NEWS! Man United To Be Without 4 Key Players For Europa League Clash Against AZ Alkmaar

Wilfred Ndidi (8): Ndidi missed Nigeria’s four games in 2020, and his absence was felt as the team failed to win any of the games.

However, he returned on Saturday evening and showed his quality. He offered solid protection to the back four, while he was comfortable on the ball.

Joe Aribo (6): An average performance from the Rangers star. Tidy on the ball, but did not offer much going forward.

Samuel Chukwueze (5): The Villarreal winger was trying to do too much, while he was also poor with his set-pieces. He had one or two chances to score but was wasteful in front of goal.

Henry Onyekuru (6): A good performance from the Galatasaray striker, who is back in the team after a long hiatus.

His work rate was brilliant, and he also helped his full-back in defensive duties. However, he could offer more in the attack.

Kelechi Iheanacho (7):  The Leicester City midfielder is a man in form, but he was subdued for most parts of the first-half.

The 24-year-old played just behind the striker, which may have contributed to his performance. However, he improved in the second half before he was taken off.

Victor Osimhen (7): Energetic as usual, and full of running. Missed a couple of chances in the first half and was denied by the post in the second. His shot led to the goal, though.

Paul Onuachu (8): He has had his fair share of criticism anytime he pulls on the green white green jersey. He has also been unable to convince the Super Eagles manager Gernot Rohr, who is not a fan of his style.

CHECK IT OUT:  I Do Not Regret Killing My Father – 40 Year Old Man Reveals

The 26-year-old was not even on the original 24 man list despite scoring 27 times for Genk this season. But he was later called up after Nantes failed to release Moses Simon due to Covid-19 restrictions.

And there’s no better way to stake a claim in the team than scoring the winner. His hold up play was also not bad.

Anayo Iwuala (5): One of the home-based players in the squad. He came on for Onyekuru, and was decent, although he was on the receiving end of an angry outburst from Osimhen for failing to pass.