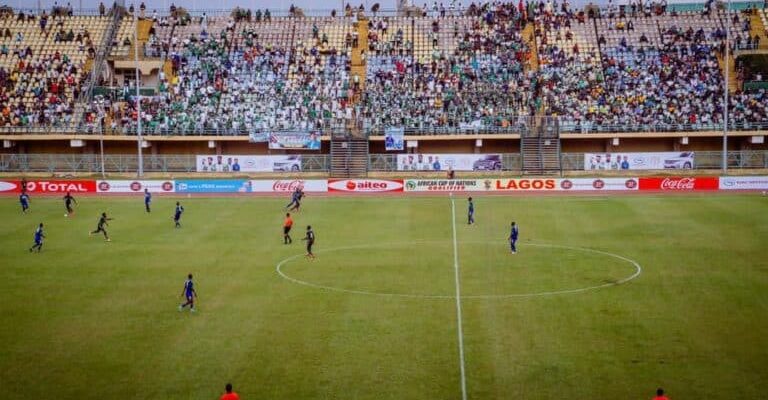 Ten years after they last played in the city and 20 years after their competitive match,  Lagos finally welcomed the Super Eagles back home for their final 2021 Africa Cup of Nations Qualifier against Lesotho.

It was a homecoming met with so much fanfare, even though spectators filled only 30% of the stadium capacity.

The three-time African champions had already secured qualification and top spot in their Group before the homecoming following a 1-0 win over the Benin Republic on Saturday.

However, they still needed to deliver excellent performance on Tuesday as it’s the first Super Eagles game in over ten years.

Anticipation had started almost a month before the match with facts about Nigeria’s previous games in the city.

Although tickets were not sold for the match, some lucky fans were given tickets on the eve of the game. The fanfare started on the morning of the clash.

While there was enough security, fans still gathered outside the stadium ahead of time to welcome their darling team.

Two hours before the game, it looked like a carnival with many fans spotting dresses that displayed the team’s colours (Green White Green), while there was the sound of trumpets around the stadium.

Meanwhile, inside the stadium, free drinks were shared with fans with tickets. The team arrived at the stadium with a lot of crowds cheering them on.

As at this time, there was a little bit of melee at the two gates as crowds without tickets were battling so hard to get access.

CHECK IT OUT:  BBNaija: Ka3na and I only kissed aggressively under the sheets – Praise (Video)

Nonetheless, it was resolved eventually, and calmness was restored. The Lagos State Governor, Babajide Sanwo Olu and the Speaker of the House of Assembly, Femi Gbajabiamila, were also in attendance.

The match kicked-off at 5 pm West African time and the atmosphere was electric from start to finish. There was the sound of vuvuzelas and trumpets across the corners of the stadium.

Nigeria started on the front foot as expected, and 23 minutes into the game, the stadium erupted in joy as Lagos homeboy Victor Osimhen opened the scoring with a delicate finish.

The Napoli star celebrated by applauding fans, who reciprocated by singing his praises. The Super Eagles did not score more in the first half, but they doubled their lead five minutes after the break courtesy of a strike from Oghenekaro Etebo.

The Galatasaray midfielder side-footed home after receiving a pass from Osimhen. And just seven minutes before time, Paul Onuachu added gloss to the scoreline with a superb finish from inside the box.

It was indeed a great performance from the three-time African champions on their return to where it all started for them.

Osimhen was named man of the match while Wilfred Ndidi was the most valuable player. Both players walked away with one million naira each.

Meanwhile, outside the stadium, the supporters club were still blowing their trumpets as the party continued. It remains to be seen if Lagos will host future games, but given what they offered on Tuesday, there’s no reason why the City should not dream.

CHECK IT OUT:  Young Nigerian Lady Secures Her Future As She Marries A White Man (Photos)