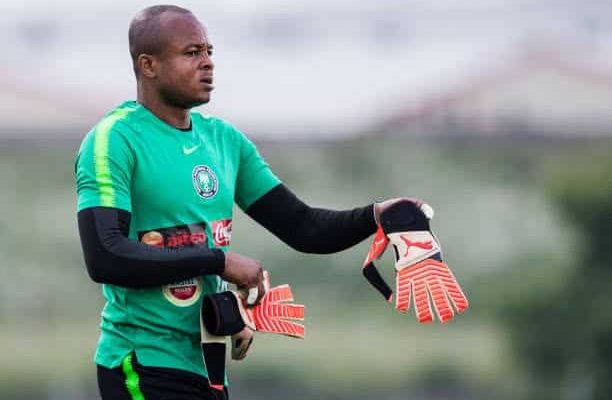 The Naze Millionaires were the favourites against the basement club, but they had their goalkeeper to thank for coming out of the clash unscathed

Super Eagles goalkeeper Ikechukwu Ezenwa was one of the day’s heroes as Heartland secured a narrow 2-1 win over bottom-of-the-table Adamawa United in a game week 19 NPFL tie played at the Dan Anyiam Stadium on Monday evening.

Samuel Nnosiri broke the deadlock for the visitors from the penalty spot midway through the opening half. But Emmanuel Oguagu headed home the equaliser shortly after the interval before Emeka Atuloma curled home the winner off a brilliant free-kick 15 minutes later.

Nigeria international Ezenwa, however, outshone many with numerous fantastic saves in either half.

The shot-stopper first came to his side’s rescue in the 25th minute, brilliantly saving Etete Okon’s shot when it seemed destined for the back of the net.

After making a series of routine saves, Ezenwa then produced another Oliver Kahn-esque stop in the 41st minute off a header to preserve Heartland’s lead.

His experience was also crucial in the closing stages as he helped his defence stay calm to close the game with another three points in the bag.

Ezenwa did not make the Super Eagles squad that defeated the Benin Republic and Lesotho in March as head coach Gernot Rohr preferred Enyimba’s goalie John Noble instead.

In the other match played at the Umuahia Township Stadium, Abia Warriors outclassed Plateau United 2-1 with all the goals coming in the first half.

Paul Samson got the home side in front after just six minutes, but Mustapha Ibrahim equalised from the spot five minutes later after the referee spotted an infringement in the box.

CHECK IT OUT:  BBNaija 2018 Housemate, Cee-C Allegedly Falls Out With Top Brands Over Nasty Attitude

But Godwin Obaje restored Abia Warriors lead in the 16th minute, and there was no further goal as the hosts claim all the three points at stake to send the visitors back to Jos empty-handed.