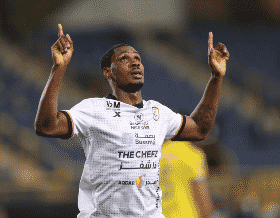 Exactly one month after suffering a muscle injury, former Manchester United striker Odion Ighalo made his comeback to help Al Shabab record an excellent 4-1 win at Al-Batin in a Saudi Pro League match on Saturday evening.

Ighalo suffered a rupture of the first degree in his posterior muscle during his side’s 2-1 defeat at Al Ittihad on March 10.

But the Nigerian forward played every minute at the Al-Batin FC Stadium as a brace each from Cristian Guanca and Ever Banega powered Al Shabab to their 14th victory of the campaign.

Ighalo has enjoyed a decent start to life in Saudi Arabia, scoring three goals in eight appearances for Carlos Hernandez’s title-chasing side.

In Switzerland, goalkeeper Sebastien Osigwe kept a second clean sheet in as many games as Lugano edged FC Lausanne-Sport 1-0 at the ooh.

Osigwe conceded in each of his first four games of the season as Lugano struggled to win just a match, drawing the other three between September and October.

The 27-year-old still earned a Super Eagles call-up ahead of the team’s friendly matches against Algeria and Tunisia last year.

But on his return to his club from international duty, he was relegated to the bench. He didn’t make a competitive appearance until three days ago when he guided Lugano to a 3-0 win over Monthey in the cup competition.

Osigwe’s brilliant displays convinced head coach Maurizio Jacobacci to name the shot-stopper in the starting eleven for a league match for the first time this year.

And he didn’t disappoint as Lugano secured their ninth win of the season to move to second place, a massive 20 points behind league leaders Young Boys.

CHECK IT OUT:  Angry Tadic Blast Referee After Ajax 4 – 4 Draw With Chelsea At Stamford Bridge