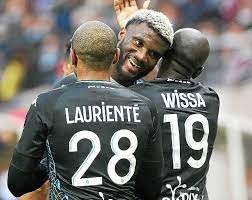 Victor Osimhen, Kelechi Iheanacho, and Paul Onuachu are all getting the goalscoring job done for the country, but a younger compatriot is aiming to join them

Moffi’s short career has seen many ups and downs. The 21-year-old has been found not good enough at Kauno Zalgiris, went club-less through 2018, impressed at Riteriai, and spent only eight months at Belgian side Kortrijk.

Now playing in one of Europe’s top five leagues, the 21-year-old is knocking on the door of a Super Eagles debut after some season-defining goals for FC Lorient.

Six of Moffi’s goals arrived between January and February, including the winner against champions PSG and a brace in the 2-2 draw at Monaco.

Those stunning strikes earned the young forward a spot on the Super Eagles standby list in March, although coronavirus travel restrictions would’ve prevented him from making the team despite a few withdrawals.

Moffi has contributed a goal and an assist in Lorient’s last two matches, and more of such productivity could throw him up again for selection ahead of World Cup qualifiers next month.

And the €8 million-rated star is convinced he would lose his cool the day he makes his debut for the Super Eagles.

“I can’t explain how excited I was when I saw my name the first time, but I am sure I am going to go crazy with happiness if given an opportunity like this to represent my country,” Moffi told ESPN.

CHECK IT OUT:  I am not afraid of losing 2023 election – Governor Makinde

“Every player wants to represent their country. If I get the opportunity, I am going to give 110% and work my socks off to help the team, and I am sure it is going to be an amazing experience.”

With the established trio of Napoli’s Victor Osimhen, Genk’s Paul Onuachu, and Leicester City’s Kelechi Iheanacho in top form in front of goal, it would take some more extraordinary displays from Moffi to see his dream come true.