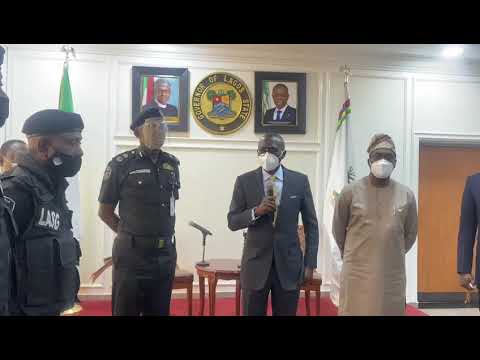 Governor of Lagos State, Mr Babajide Sanwo-Olu, this afternoon, met RRS Officer, ASP Erhator Sunday, who was assaulted by one Victor Ebhomenyen and his friend after driving against traffic at Oniru, Ikoyi few days ago, in a viral video. Mr Governor commended the officer on his high-level of professionalism and encouraged other officers to emulate him.

CP Hakeem Odumosu confirms that the prime suspect, Victor, is in Police Custody at the State Criminal Investigation Department, Panti, while his accomplice, Etinosa has been identified and efforts are on to arrest him too.

Mr Governor commended the @rrslagos767 officer for his high-level of professionalism and restraint …. He encouraged other police officers to emulate the ASP.

CHECK IT OUT:  EFCC arrested Okorocha over ₦7.9 billion fraud