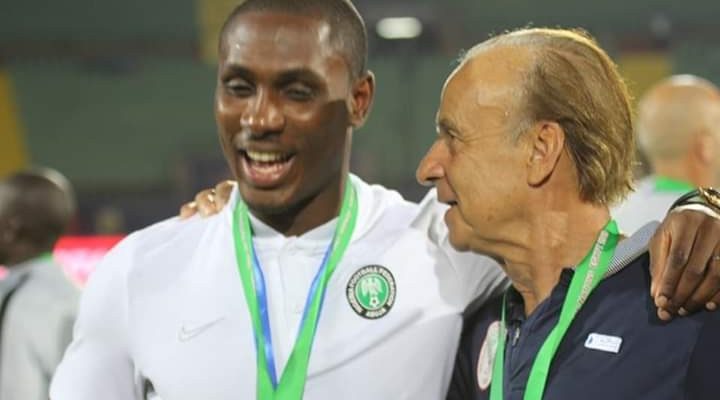 Super Eagles manager Gernot Rohr has revealed why Odion Ighalo could make a potential return to the Nigerian national team despite the array of attacking talents in the squad.

Ighalo called time on his Super Eagles career after finishing as the top scorer and helping Nigeria win bronze at the 2019 Africa Cup of Nations.

Following his retirement, Victor Osimhen stepped in to replace him, and the Napoli striker has been more than an able replacement.

The 22-year-old has scored six goals in the ten games he has played for the team since Ighalo retired. Osimhen is not the only option available to Rohr, with the likes of Paul Onuachu, Sadiq Umar, Kelechi Iheanacho and Simy Nwankwo showcasing their worth this season.

Only Robert Lewandowski (35) has more league goals than Onuachu (29) in Europe this season. Simy is also on course to reach the 20-goal mark in the Italian Serie A this season, with the striker currently on 17.

Iheanacho’s 15 goals in all competitions for Leicester City this season is the highest he has ever scored in a single season, while Umar’s 16 goals for Almeria is the most he has scored since he became a professional.

But despite these options available to Rohr, the German tactician revealed Ighalo could still make a return to the national team.

Speaking in an interview on Elegbete TV, The former Burkina Faso manager revealed the players could benefit from the experience of Ighalo.

When asked why he wants Ighalo back, Rohr said: “The answer is simple. The answer is when you look at the age of all the players that you speak about, they are all young, and also we need experience.

And if, for example, Odion Ighalo will play with us- I don’t know if it’s possible for the moment, but perhaps if he’s coming back, I think players like Osimhenn and even Kelechi Iheanacho could have a big help in the presence of Ighalo to learn, to progress to see his professionalism.

He’s a great professional, a big example for everybody, and he’s also a great goalscorer. We are very young, especially in the attack, and it could be good to have some more experience with us, Rohr added.

Nonetheless, it remains to be seen if the Al-Shabab striker will be part of the Super Eagles squad when they begin their 2022 World Cup qualifying campaign.