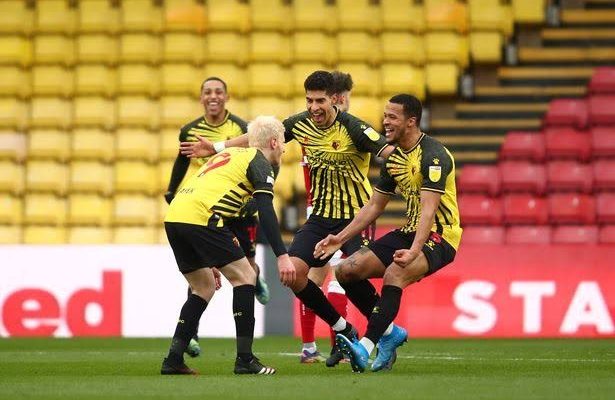 The Hornets have ended their brief stay in the Championship, with their Nigerian international defender now set for a taste of top-flight football next season

Ismaila Sarr’s 11th-minute penalty was all Watford needed to hand a 1-0 defeat to Milwall at the Vicarage Road on Saturday afternoon and book an automatic promotion spot to the English Premier League.

The Hornets are guaranteed to finish second on the Championship table after amassing 88 points with just two games left to play, with third-place Brentford nine points behind but with three outstanding matches.

Twenty defeats and a meagre eight wins saw the Hornets finished 19th in the Premier League last term earning them demotion to the second-tier alongside Norwich City and Bournemouth.

But Watford did well to retain the services of many of their important players, including Ismaila Sarr, Tom Cleverley, and Troy Deeney while adding Troost-Ekong to a defence that was exposed time and again in the Premier League.

The end product is an efficient side that has pocketed their promotion ticket, having won more games than all but Norwich while boasting the best defence in the Championship.

Troost-Ekong has been a big part of that incredible achievement, with the Super Eagles vice-captain featuring in 32 league matches and scoring one goal.

It is in defence, though, that the former Udinese man has put in his best shift, either at centre-back or at left-back, with his performance helping Xisco Muñoz’s men concede just 28 times in 44 games.

Watford conclude an outstanding season, having won 17 of 21 games at home – the best record in the division.

CHECK IT OUT:  Nawa O!!! Uber Driver Naked Himself To Protest After He Was Fined By Airport Tow Truck Driver

Troost-Ekong will be particularly pleased with his contribution in guiding the Hornets to keep a clean sheet in each of their last six home games – the foundation on which their promotion was built.

And after paying his dues in the Eredivisie, the Turkish Super League, the Belgian First Division A, and the Serie A, Troost-Ekong is ready to test his wits against the best the Premier League has to offer.