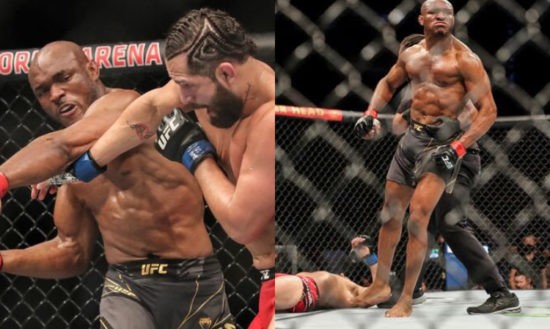 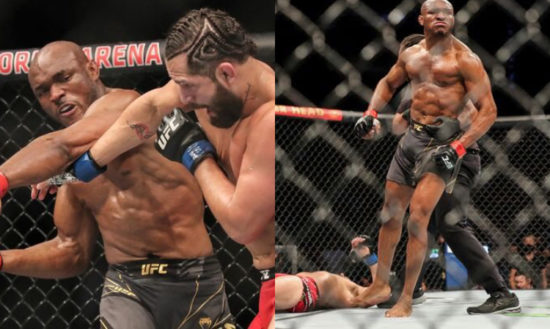 Usman successfully defended his welterweight title in his rematch with Masvidal who was left prone on the canvas.

Kamaru Usman retained his welterweight with a stunning KO of Jorge Masvidal at UFC 261.

The rivals were meeting for a second time in less than a year following Usman’s points victory last July.

But on this occasion the champion needed a little over six minutes to retain his title, rendering Masvidal unconscious with a stunning right hand.

He followed up with several unanswered blows on the canvas before referee Herb Dean stepped in.

Usman has now made four defences of his 170lb title and is expected to face another rematch later this year against Colby Covington whom he stopped in December 2019.

“You all said you wanted violence… you’re welcome,” said the champion.

“No disrespect… I want to say thank you to my man Jorge. You elevated me, you made me have to… it’s been a while since I’ve been nervous before a fight but he elevated me.

“He made me go to the workshop, I had to sharpen my tools to come out and put on a performance like that. I am still getting better.”

Masvisal added: “First time [I’ve been knocked out] in my career and it’s front of my people, my family and my friends so it hurts.

“I’ve never been knocked out in 54 fights. Usman showed me something I didn’t see in the first fight. I didn’t see his power.

“I thought we were going to wrestle more, I was ready to wrestle for 25 minutes. All the props in the world to him, he caught me by surprise and he has my number. There’s nothing I can say but he wont his fair and square.”

CHECK IT OUT:  Do You Agree?? No Electoral Process Is Perfect, Says INEC Chairman