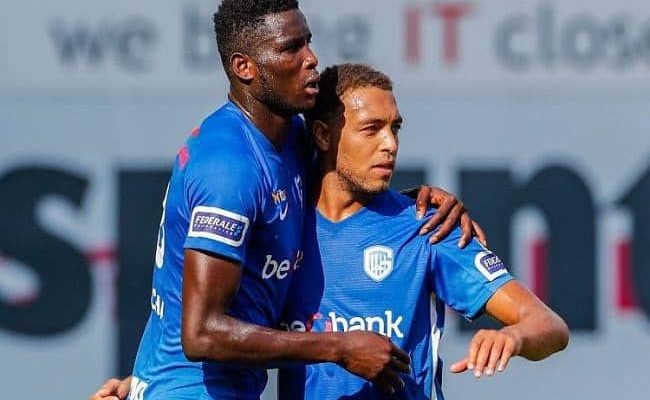 In a season where several Nigerian strikers are painting Europe red with goals, the Belgian-born forward is struggling to make an impact with the Pro League side

Ex-Mallorca star Marvin Ogunjimi backs Cyriel Dessers to step out of Paul Onuachu’s shadows and become a hit for Genk next term.

Genk brought in Dessers from Heracles in the summer for five million euros following the striker’s excellent performances in the Netherlands.

The former Utrecht man scored 15 Eredivisie goals to finish the league as the joint top scorer despite not playing for any of the country’s top four clubs.

He was expected to lead the line for Genk ahead of this campaign, with Onuachu only managing seven league goals for the Belgian side last term.

But Onuachu won back his starting shirt earlier in the season following a rich vein of form and has since sealed his status as the club’s first-choice striker.

The former FC Midtjylland ace has notched 33 goals for club and country, relegating his compatriot to a bit-part role.

But with a summer switch to one of Europe’s top leagues likely for Onuachu, former Genk stalwart Ogunjimi is tipping Dessers to seize his chance and produce his best moments.

“l hope for a breakthrough for Dessers next year,” Ogunjimi told Sporza.

“This year, he had no luck with his competitor Onuachu. You can wait for a dip from your striker, but if he continues to score, you have no luck. You have a problem.”

Belgium-born Dessers has one cap for the Super Eagles, having featured in Nigeria’s 1-1 friendly draw with Tunisia last year.

CHECK IT OUT:  Delay Of Ministers Is Affecting 2020 Budgets – Senate President Lawan Speaks

The 25-year-old has managed just four goals in 28 league matches for Genk.