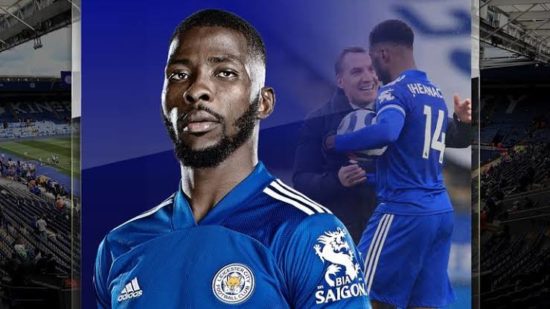 Nigeria forward Kelechi Iheanacho is the most viewed player on the Transfermarkt website in the last 24 hours.

The Leicester City forward provided an assist and scored the winner in the Foxes’ 2-1 defeat of Crystal Palace in a Premier League tie Monday night at the King Power stadium and the Transfermarkt website has revealed the Nigerian as the top on the list of its 10 most viewed players.

Iheanacho is followed by Real Madrid’s Karim Benzema who spared the Los Blancos blushes Tuesday evening with the equalizer in their UEFA Champions League tie against Chelsea while Lionel Messi, the Argentine who has been inspirational for Barcelona in their bid to reclaim the LaLiga title is third.

Chelsea’s American forward, Christian Pulisic who scored the all-important away goal for the London Blues against Real Madrid Tuesday evening is fourth and he is followed by embattled Juventus forward, Cristiano Ronaldo who has been blamed for the Old Lady’s uninspiring displays in the Serie A this term.

Another Chelsea player, Timo Werner is sixth with former Blues midfielder, Eden Hazard who has spent most of his season on the treatment table at Real Madrid surprisingly seventh, ahead of one of the most sought-after forwards in the world football, PSG’s Kylian Mbappé.

Borussia Dortmund’s Erling Haaland is the ninth most viewed with Turkey striker, Burak Yilmaz incredibly making the cut as the 10th on the list.

Still valued at just €15m, Iheanacho has been in the news since he started his goal-scoring spree against Burnley in the Premier League culminating in the winner against Crystal Palace on Monday. He has scored nine times in his last seven Premier League games and was deservedly voted the Premier League Player of the month of March.

CHECK IT OUT:  We Did Not Shoot Channels TV Reporter Or Deputy Police Commissioner – Shiites Speak Out

The post Iheanacho Beats Ronaldo, Messi As Most Viewed Player On Transfermarket appeared first on .