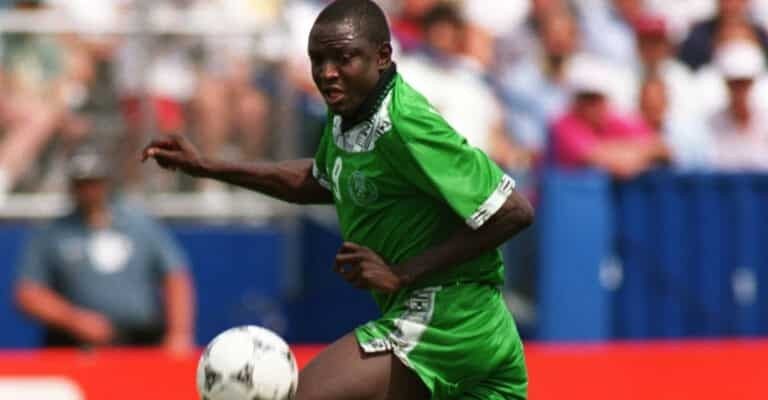 The socially awkward striker grovelled in front of his teammates before they went to USA ’94, where he scored the country’s first goal at the World Cup

Former Nigeria captain and coach Sunday Oliseh has revealed how star striker Rashidi Yekini shockingly went on his knees to beg his teammates for support ahead of the FIFA World Cup USA ’94.

Nigeria were making their debut at the tournament, and Yekini, who was the Super Eagles’ top scorer, realised that he was the envy of many and was afraid he would not find the needed service to score at the Mundial.

He had become the first Nigerian to be named CAF African Footballer of the Year in 1993. His five goals the following year had done them a world of good in winning the 1994 Africa Cup of Nations title in Tunisia, and Oliseh stated that he was the “real and only superstar” of the team.

But there seemed to have been envy at his good fortunes among teammates. Rumours in the media stated that the players were unhappy that the socially awkward striker had refused to spend any of his POTY winning money on teammates.

Writing in his new autobiography, Audacity to Refuse, Oliseh said that days before the team’s departure to the US, Yekini fell on his knees to plead with his teammates for consistent service to enable him to score goals.

It was an act that “shocked” Oliseh and has him “puzzled” till date.

The following are excerpts from the book:

CHECK IT OUT:  Man Kills His Employer And His Mom 24 Hours After He Was Employed

“The next day we had a meeting amongst ourselves called up by Captain Keshi and the senior players. Several issues were discussed and like always, the youngsters and minorities, of which I was a member, just looked on speechless and impotent at the charade.

“To my greatest surprise, Rasheed Yekini, who had been criticised, in my opinion unjustly for certain small issues, went on his knees in front of the whole group and pleaded for forgiveness from anyone in the group who might have held any grudges against him for whatever reasons. I was totally shocked.

“His reasoning, as I later gathered, was that he feared being ganged up against at the World Cup proper and deprived of service in matches. This action broke me down and till date has me puzzled. I felt revolted but impotent.

“In my opinion, he was the real and only superstar in the group, the most prolific in front of the goal, and by far the best striker the Super Eagles ever produced.

“Our entire attacking strength was built around him, and it was his goals that had qualified us for the 1994 World Cup.”

“He had almost single-handedly won us the 1994 African Nations Cup just weeks earlier, and without his potency, we did not stand a chance at the World Cup.”

“How could he beg for service when most of the goals he got at the AFCON he got from me and Finidi George, and we liked the guy, though he did not socialise enough with us to know it.

True, Rashidi Yekini had clamoured for reinforcement to the team after the 1994 AFCON’s success, and he might have been paying the price.

“Unfortunately, some media houses falsely later rumoured that the entire Green Eagles team players were unhappy with Rashidi because he did not share his prize money, 5,000 dollars, from the African Player of the Year award with the group; 5,000 Dollars divided by 22 players would be 227 dollars and 30 cents, a ridiculous, false, and baseless accusation!”

Yekini would go on to score Nigeria’s first-ever World Cup goal in a 3-0 victory against Bulgaria a few weeks later.

Sunday Oliseh’s Audacity To Refuse is available via www.sundayoliseh.tv and in Nigeria via Roving Heights Books.