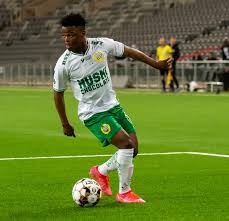 Nigerian youngster Akinkunmi Amoo grabbed his second goal of the five-matchday-old Swedish Allsvenskan to guide Harmmaby to a thrilling 3-2 victory over Sirius on Saturday.

The home side had won just once ahead of their clash against a tough Sirius side that had lost none of their previous four games.

But Khalili and Andersen found the net either side of the break to give Hammarby a two-goal advantage.

The visitors struck back through Ortmark in the 50th minute. But Amoo showed good composure to finish off a fine Selmani pass which restored the home side’s two-goal advantage.

The 18-year-old former Golden Eaglets star’s strike then proved to be the match-winner as Bulut net Sirius’ second goal late in the encounter.

Hammarby now boast seven points from five games to move up to 7th on the league table, but they are some distance off leaders Djurgården, a team that has won each of its first four matches.

Meanwhile, in Germany, Kevin Akpoguma grabbed his maiden goal of the campaign to help Hoffenheim battle back from a two-goal deficit to claim a 4-2 win over Schalke 04 at the Prezero Arena.

The visitors were two-nil up by halftime courtesy of goals from Mark Uth and Shkodran Mustafi.

But Andrej Kramaric reduced the deficit shortly after the break before Akpoguma equalised for the home side moments after.

Christoph Baumgartner and Ihlas Bebou then completed the comeback within four minutes of the hour-mark.

Injury has reduced Akpoguma’s impact for Hoffenheim this term, with the Nigerian defender making just 15 Bundesliga appearances for the German side.

CHECK IT OUT:  “Your Head Is Not Correct” – Simi Blasts Ghanaian Relationship Counselor For Saying This (WATCH VIDEO)

A stubborn thigh muscle strain kept him out of action for the first four months of 2021, denying him the chance to be a part of the Super Eagles squad for the Afcon qualifiers in March.