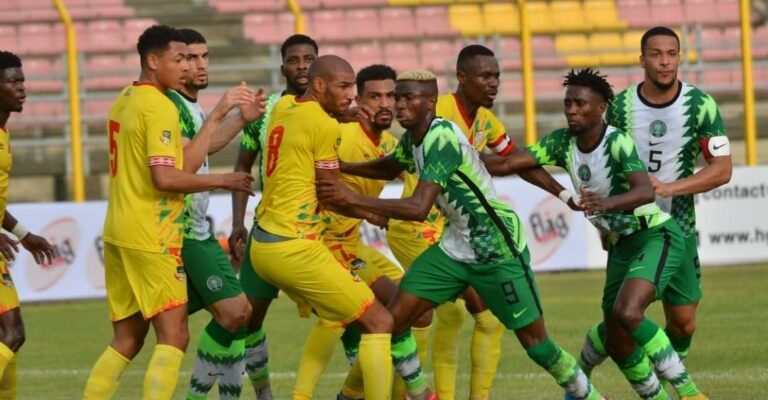 The two strikers have been the top man for their respective clubs in the last few weeks, and the former goalkeeper believes it’s a good thing for the Super Eagles.

Former Green Eagles goalkeeper Andrew Aikhomogbe believes the partnership of Kelechi Iheaancho and Victor Osimhen can give any defence a serious nightmare due to their hunger and determination to make a difference.

Osimhen’s latest impressive display saw him score two and set up another to help Napoli crush relegation-threatened Spezia 4-1 in Serie A and boost its Champions League hopes on Saturday.

Both of Osimhen’s goals came in the first half after Piotr Zielinski’s opener. The Super Eagles attacker has now scored ten goals and provided three assists in 27 appearances across all competitions this season.

On the other hand, Iheanacho, who has maintained his goal-scoring form, netted in Leicester City’s 4-2 lose against Newcastle in the Premier League.

The 24-year-old has been in fine form this season, and last month he was named the winner for the Premier League Player of the Month award.

Iheanacho has scored 10 Premier League goals since the start of March, the most of any player. The only player to score more goals over this period in Europe’s top five leagues is fellow Nigerian Simy (12 in Serie A). Super.

Speaking with Soccernet.ng from his base in Cairo, Egypt, Aikhomogbe said that Iheanacho and Osimhen could go on to become one of Nigeria’s best partnerships in the Super Eagles.

“I don’t think having Osimhen, and Iheanacho’s partnership in the Super Eagles attack will be too bad, he said.

CHECK IT OUT:  UEFA Charge Bayern Munich After Display Of ‘F*** VAR!’ Banner

Both players are scoring freely with their various clubs in Europe, and I know they are just one of the best for the senior national team. The two players can give any opponents cause for concern.

“Fine, Rohr can still try the partnership of Osimhen and Onuach or Iheanacho and Onuachu, considering the fact that Onuachu has shown that he can score goals at will.

Generally, I believe the bulk of the work will fall on the lap of the German tactician in deciding who best fits his style in the attack,” he added.