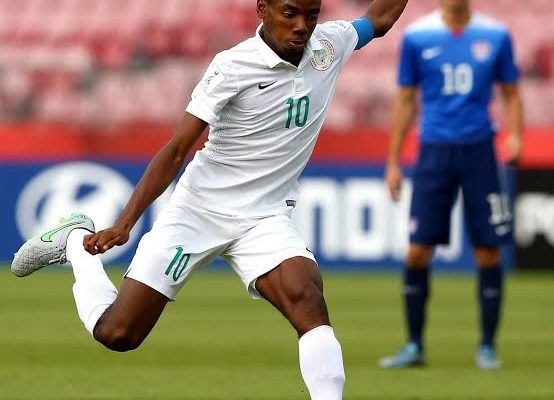 Nigerian youngster Kelechi Nwakali has confirmed that he has no intention of switching his allegiance from Nigeria to another country.

Nwakali is yet to make his Super Eagles debut despite excelling for the West African nation at different youth levels.

The midfielder was an influential star as the Golden Eaglets romped to a record sixth victory at the cadet FIFA World Cup six years ago.

He secured a move to Arsenal after that tournament, after which he progressed to the Nigeria Under-23s in the 2019 Africa u23 Cup of Nations.

But he left England for Spain last summer to join Huesca in La Liga.

A lack of first-team appearances forced him to join Alcorcon in the Segunda Division, where his excellent performances have brought him back to the limelight.

Yet head coach Gernot Rohr only named the midfielder to the Super Eagles standby list for the March Afcon qualifiers, leaving him still technically eligible to switch to another country.

The player’s older brother Allwell Nwakali reportedly told the media that foreign country agents had approached Kelechi, and the player was still “studying the proposals”.

But the former Arsenal man has quickly spoken out to deny this. Writing on his Twitter, he said: “Contrary to reports circulating in the media, I remain committed to serving my country.

“It is always an honour to wear the green of Nigeria, and it is my dream to continue to do so. I categorically deny these reports and will continue to work hard until I am called upon.

“I am hugely proud to have represented Nigeria at various levels and am grateful to have had these opportunities in my career thus far.

“I have never considered playing for another nation and continuing to play for Nigeria at international level remains my priority and my dream.”

Nwakali made himself a starter for Alcorcon, featuring in the starting lineup in every single one of their games since he joined in February.

The 22-year-old has also been in good goalscoring form lately, scoring four times in his last seven games.

CHECK IT OUT:  Dr Sid celebrates 2years of abstinence from smoking